TISS is still facing implications of the protest by students over issues related to GOI-PMS which went on for several months, last academic year 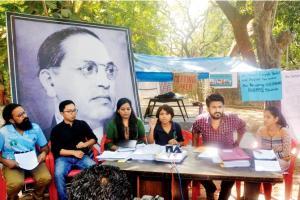 
At least 22 students of the Tata Institute of Social Sciences (TISS) have been issued notices of action against them, following disruptive activities during the Government of India - Post Matric Scholarship (GOI-PMS) protest on March 23-24. Of these, 18 have been fined Rs 1,000 each. Students said they did not expect the action.

The institute is still facing implications of the protest by students over issues related to GOI-PMS which went on for several months, last academic year. While a committee formed to enquire into the protest has already submitted its report with a recommendation to increase funding, another independent committee constituted to investigate the forceful trespassing to occupy the office of the registrar in the month of March has now presented its findings, following which the action has been taken against students who were found guilty.

According to an official, out of 27 students against whom this enquiry was held, 18 have to pay a fine of Rs 1,000 each which will be used for the scholarship fund. Four students have been warned against repeating such behaviour. While charges against one student have not been proven, another four students have passed out so no action will be taken against them.

Fahad Ahmad, former general secretary of the institute's students' union, who spearheaded the protest, said, "On the one hand the institute is accepting that the protest has helped them get a deeper understanding of the issue of fund crunch to bring about new changes; on the other, it is acting against the students who protested. It is hypocrisy on the institute's part, as they are fining students who protested about scholarships, to use that money in the scholarship fund."