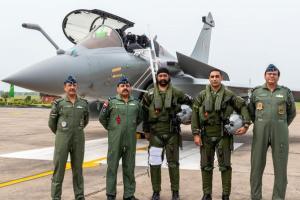 
Soon after the Rafale pilots touched down at Haryana's Ambala, Air Force Chief RKS Bhadauria complimented them for their professionalism in undertaking a long sortie from France to India within just two days and one hop as such ferries earlier used to take many days.

"In the meeting with Rafale pilots, the Air Force Chief RKS Bhadauria complimented them on their high level of professionalism as they have safely brought back these five aircraft to India within two days," IAF sources told ANI. The pilots include Group Captain Harkirat Singh who is the Commanding Officer of the 17 squadron, Wing Commander MK Singh, Group captain R Kataria, Wing Commander Abhishek Tripathi, Wing Commander Siddhu and Wing Commander Arun.

The pilots are from different fleets and have flown lesser generation aircraft in previous stints and have trained on Rafales only for 35-40 hours before undertaking a 7,000 km sortie with just one stoppage, the sources said. The five aircraft had started from Merignac airbase in France on July 27 and reached UAE's Al Dhafra airbase on the same day after one mid-air refuelling by French tanker aircraft.

The aircraft took off today morning from Al Dhafra after a brief delay and first contacted with a Naval warship INS Kolkata which is deployed in the Western Arabian Sea on a mission. The aircraft then touched down at Ambala at 3 PM where they were received by the chief of air staff.

The IAF would now integrate the Rafale fighters with the rest of the fleet which would enhance the capability of the force multifold. The Rafale fighters are considered to be the most advanced in the entire South Asian region which includes military power like India, China and Pakistan.