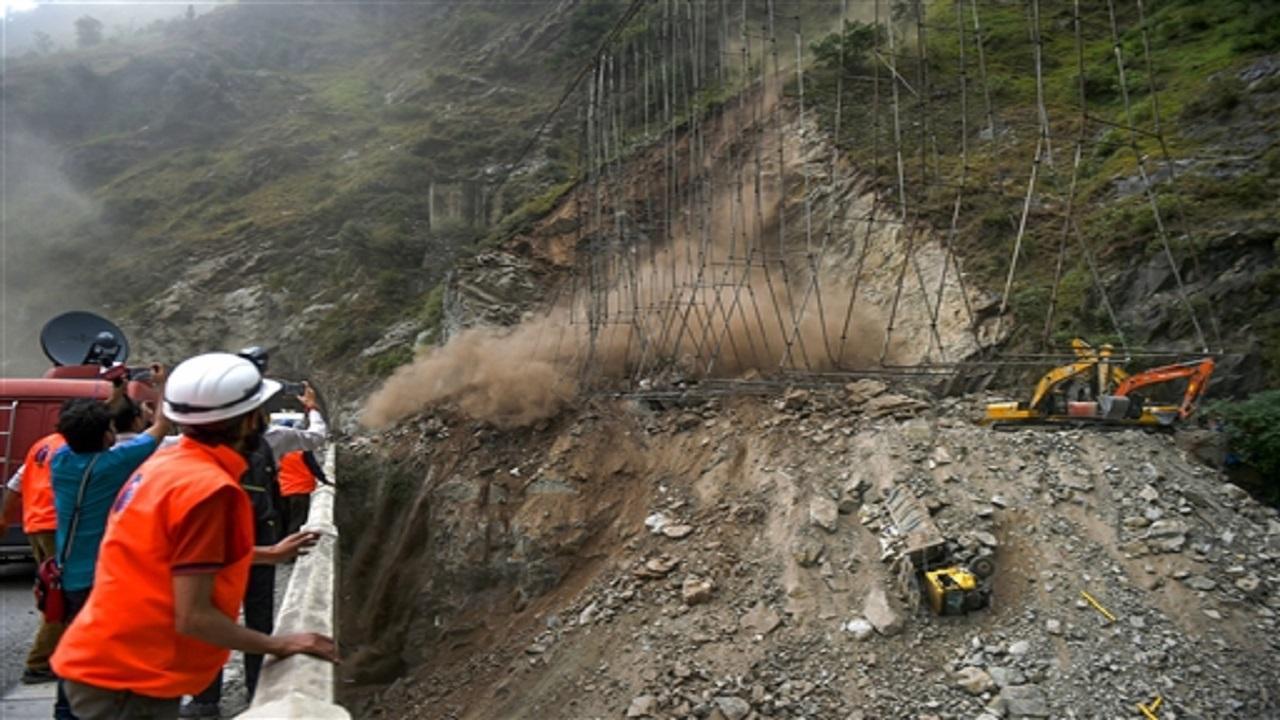 Rescue operation halted due to a landslide, after a portion of an under-construction tunnel on the Jammu-Srinagar national highway collapsed near Magarkote in Ramban district. Pic/PTI


Nine bodies were pulled out from the rubble of a landslide which hit one end of an under-construction tunnel on the Jammu-Srinagar national highway two days ago, taking the death toll in the incident to 10 on Saturday, officials said.

With the bodies of all the missing workers recovered, the two-day rescue operation ended late on Saturday evening. Three persons who survived were taken to hospital by the rescuers shortly after the incident on the intervening of Thursday and Friday.

Earlier, the officials had said that a portion of the under-construction tunnel at Khooni Nallah in Ramban district collapsed soon after the work on the project started.

But on Saturday, the deputy commissioner of Ramban Mussarat Islam quoted the National Highway Authority of India (NHAI) to say that a landslide had hit the mouth of the adit tunnel to T4.

"As clarified by NHAI, it is informed that there is no tunnel collapse near Khooni Nallah. A slide occurred on the mouth of the adit tunnel to T4 on Thursday night under which a labourer component of concessionaire company was working. Operation continues," Islam tweeted.

The body of one person was recovered on Friday, while three others, including two locals, were rescued and are stable.

Officials said that on Saturday, another body was pulled out after several hours of intense search. It took the rescuers over two hours to pull out the body from under the rocks.

Eight more bodies were later pulled out and shifted to hospital, the officials said, adding the labourers were crushed to death by the falling boulders.

"Bodies of all the missing workers were recovered from the scene of the landslide outside the mouth of adit tunnel during the day-long hectic search by the rescuers. While one body was recovered on Friday and three rescued, nine more bodies were found on Saturday," the deputy commissioner told PTI.

Islam said all the bodies have been sent to a government hospital for identification and other legal formalities.

He said an immediate ex gratia of Rs 25,000 from the Red Cross fund and Rs 25,000 from the company is being given to kin of two local labourers, who are among the dead. The rest of the dead include workers from West Bengal, Nepal and Assam.

The operation to rescue the trapped workers was launched soon after the incident but had to be suspended on Friday evening due to a fresh landslide and inclement weather.

Over 15 rescuers, including the Station House Officer of Ramsu police station, Nayeem-Ul-Haq, had a narrow escape during this time, officials said.

Senior Superintendent of Police, Ramban, Mohita Sharma said an FIR was registered in the local police station in connection with the incident.

"This is not an ordinary incident. There seems to be criminal negligence. A judicial inquiry should be ordered to probe the horrific incident so that the guilty are identified and brought to justice," he said in a statement.

Tarigami, who is the Jammu and Kashmir unit president of CITU, said, "Reportedly NHAI had handed over the execution of the work of this patch to SIGAL company which in turn handed it over to a little-known sublet SARLA, which is reportedly a software company and not technical."

Jammu and Kashmir Congress president G A Mir also demanded an inquiry into the incident and adequate compensation for the kin of the deceased.