What you make of marriage

"One year since my partner and I legally married, I find myself reflecting on the self-defining decisions that eventually led me to the pivotal moment and a healthy, meaningful relationship" 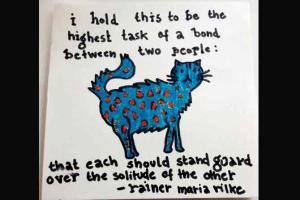 A few days ago when I opened my journal, a card with a drawing made by a friend along with an excerpt from Rainer Maria Rilke popped out. PIC/Rosalyn d'mello

I'm struggling to rein in the buzzing in my brain. My thoughts are all over the place; not scattered, but in a state of anticipation, waiting for the authorial 'I' to yarn them over so they can manifest as a pattern, as form.

It intrigues me that I remain unable to post a picture on any social media platform about my apartment after having emptied it of my presence, after having erased every trace of my eight-year-long inhabitation within its walls so as to prep it for a potential new resident.

Even until a week later, I found myself looking at the videos I had made of each room as my documentation for its owner who lives in Manali, proof that I had left everything in order, was respectful and considerate. She was moved by my civility and sent me a blessing for my future. It has been exactly two months since I vacated my nest. In retrospect, it feels like most of this year was spent preparing for that move.

Meanwhile, exactly one year has passed since we spent the day in a court in Delhi with our three witnesses, waiting for the sub-magistrate to sign off on some papers and declare us legally married.

It's not nothing to have been married to a person for a whole year. I won't deny that to many of my friends and family, the decision seemed rushed, at the time. I had known my partner for a little over a year, and half of that time had been spent long-distance. Funnily, I had no sense of hesitation about our decision to marry once we had made it.

When I look at my right hand, I smile compulsively, because I see this silver ring I've been wearing since January 2019. My partner had come to India to spend a month with me, and since we were going to be travelling, and because, in the past, I'd been targetted in small towns by police for being an Indian woman with a white man, I thought it'd be best if we pretended to be married.

At first, I may have been kidding about it, but he seemed to be calmly on board with it. We went to a jeweller in Khan Market and bought two silver rings. That night we made a mock-ceremonious gesture of placing the ring on each other's fingers. Four weeks later, when it was time for him to leave, I asked if he was likely to keep wearing the ring. I wanted to know so that I'd accordingly either wear or remove it. Rings were never a preferred item of jewellery for me. We thought about friends who would chide us for doing something so tacky, but we decided to do what felt right to us. By then, we'd both gotten used to seeing the silver on our right hand. We went along with it.

The past year with him has felt easy like that. Because my parents were never one to be satisfied with a civil marriage, which is, in fact, the more important and legally binding, we had agreed to undergo a religious ceremony, which we have yet to do.

The Catholic church, however, demands that anyone who seeks to marry within the institution must go through a mandatory preparation course. This we did do, back in early January this year, in Mumbai.

I have to confess, some of the lessons we learned there have been fundamentally nurturing to our relationship. We found two components to be most crucial; one on intimacy (did you know there were five kinds of intimacy?) and one on conflict, how, when managed lovingly, it could enable even greater intimacy. (If you're inclined to learn more, look for the book we were made to read, called 'Creative Love'.)

Once, when I was railing against the heteronormativity of the institution to a friend, she told me that marriage, quite simply, was what you make of it. I held on to this definition, because it contained the promise of something customisable.

A few days ago, when I finally opened my journal to make notes, a little card popped out, a drawing made by a friend, Meenakshi Reddy Madhavan, of a blue cat with red polka dots, around which she inscribed, in sketch pen, this excerpt from Rainer Maria Rilke, "I hold this to be the highest task of a bond between two people: that each should stand guard over the solitude of the other."

It eerily exemplifies the nature of my relationship with my partner. Neither of us perform fixed roles, instead, we cater to each other intuitively, and by communicating our feelings without assigning blame. It is the healthiest relationship I've ever been in.

Every night I go to sleep grateful that I didn't give in to the world's pressure to marry; that I took my time to evolve a strong sense of my selfhood, and that I learned to be financially and emotionally independent.

I wish more energy was spent encouraging women to build and exercise our own agency rather than policing us into subscribing to patriarchal norms. That is the world we must continue to build. One year into marriage, I delight in knowing I am directly responsible for my state of happiness.

Deliberating on the life and times of Everywoman, Rosalyn D'Mello is a reputable art critic and the author of A Handbook For My Lover. She tweets @RosaParx
Send your feedback tomailbag@mid-day.com

Next Story : What does a critic do?