Trump thanks supporters, Biden offers to work harder for non-supporters

Polling stations have already opened in the state of Vermont and the first ballots were cast earlier on Tuesday in Dixville Notch and Millsfield, two small towns in New Hampshire 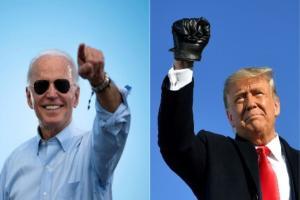 
As voting begins for the much-anticipated US presidential election on Tuesday, US President Donald Trump has thanked his supporters, while Democratic nominee Joe Biden said that he will work harder for those who do not back him

In a tweet early Tuesday morning, the President, who is seeking another four years at the helm, said: "To all of our supporters: thank you from the bottom of my heart. You have been there from the beginning, and I will never let you down.

"Your hopes are my hopes, your dreams are my dreams, and your future is what I am fighting for every single day."

Also taking to Twitter, the former Vice President said he was "running as a proud Democrat, but I will govern as an American President".

"Because that's the job of a President," Biden added.

Polling stations have already opened in the state of Vermont and the first ballots were cast earlier on Tuesday in Dixville Notch and Millsfield, two small towns in New Hampshire.

According to the latest RealClearPolitics polling average, Biden was leading Trump by 6.7 percentage points nationally, but only by 2.8 percentage points in top battleground states, including Florida, North Carolina, Pennsylvania, Michigan, Wisconsin, and Arizona.

Meanwhile, more than 98 million ballots have already been cast in the early voting, according to the latest tally from the US Elections Project.

Besides the Trump-Biden race, all 435 seats in the US House of Representatives and 35 of the 100 seats in the Senate will also be in the fray on Tuesday.

More than a dozen state and territorial governorships, among many other state and local posts, will also be contested.

Next Story : US election 2020: Trump or Biden? Americans vote to choose next Prez