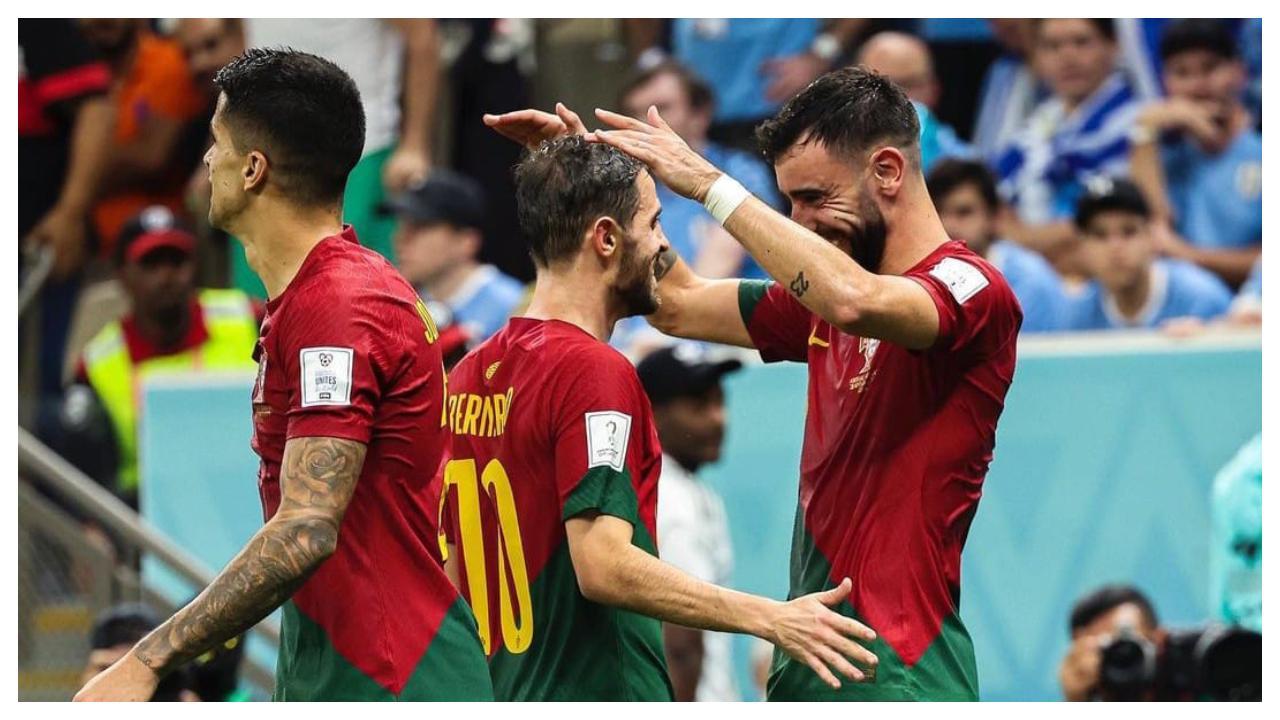 
A brace from Bruno Fernandes helped Portugal to a 2-0 win over Uruguay and a place in the knockout stage of the FIFA World Cup.

On Monday, in the last match of the day at Lusail Stadium in Qatar, Portugal's second successive win took them to six points and to the top of the Group H standings leaving Uruguay, Ghana and South Korea to fight for the second qualification spot from the group.

Portugal joins Brazil and France, the other two teams which have made it to the knockout stage so far.

Portugal started well on the ball, enjoying the lion's share of possession but Uruguay fashioned the best chance. Rodrigo Bentancur worked his way brilliantly through Portugal's defence but squandering the game's best chance in the 33rd minute, firing straight at Diogo Costa from a one-on-one situation.

At the other end Bruno worked hard, winning 100 per cent of his tackles, registering a 93 per cent pass accuracy rate and generally stringing play together for his side and with Joao Felix looking lively for Portugal on the left, Uruguay had a handful to deal with.

An attempt from distance from Joao flew wide but marked a warning shot for Uruguay, from the 23-year-old Atletico Madrid star.

Portugal continued to dominate possession but could not create a clear-cut chance while Uruguay struggled to get any control of the ball.

After a barren first half, Portugal coach Fernando Santos was hoping that his side could find a way to break the deadlock, and they did by scoring nine minutes into the second half through Bruno. The Manchester United striker added a second one in stoppage time of the second half.

In a breakthrough move Bruno's cross was travelling towards the net, Ronaldo tried to produce a glancing header but did not make contact which ended up in the back of the nets after eluding Uruguay keeper Sergio Rochet's reach. Ronaldo celebrated wildly, but Bruno was officially credited with the goal.

Uruguay down by a goal pressed the panic buttons and shifted gears during which period they came close to scoring a few times with one of their efforts hitting the metal work. Due credit to the Uruguay substite who changed the pace of the match. All of a sudden, Uruguay had just grabbed the bull by the horns and were taking the game to Portugal

And it was a stunning introduction from Maxi Gomez. After getting a pass on the edge of the box, his first time curled past a flinging Diogo Costa under the Portugal bar only to find the ball bounce off the right upright and away. That was the closest Uruguay came close to equalizing.

Portugal celebrated the goal with a second one through a controversial injury-time penalty which was awarded after VAR review.

Portugal had a penalty awarded after a VAR check. Jose Maria Gimenez handled as he fell backwards after being nutmegged by Bruno. Absolutely unintentional, but it has been given "The guy's literally putting his hand down to cushion his fall" and it is not for the first time that VAR has been found wanting on penalties

With Ronaldo substituted, the trio of changes that coach Santos made pulling Ronaldo, Felix and Carvalho making way for Joao Palhinha, Goncalo Ramos and Matheus Nunes it was Bruno, who stepped up to take the spot kick, he made a little skip in the air and just waited for Sergio Rochet to fall to the left and just stroked it to the right. A really comfortable hit into the back of the net, 2-0.

Also read: It’s been an unbelievable experience to play with Ronaldo: Marcus Rashford

Thereafter, Bruno had a chance to register his hat trick but his effort in the eight minute of stoppage time came off the metal work.

Former winners and hosts of the first edition of the football showpiece event Uruguay which drew with South Korea in their first match now have just a point from two matches and play their last match against Ghana. The African side earlier on Monday defeated South Korea 3-2 in a five-goal thriller.

Meanwhile in the second half, there was a pitch invader who ran on the pitch holding a rainbow flag.

His T-shirt had "Save Ukraine" written on one side and on the back were the words "Respect For Iranian Woman".