After being arrested, the accused alleged that he committed the crime under the influence of alcohol 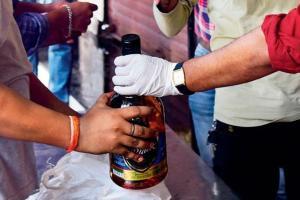 
The Titwala police on Wednesday arrested a 32-year-old man for allegedly stabbing a wine shop owner and his two employees with hammer and scissors. According to police officials, the fight took place over payment of Rs 500. With the help of the CCTV footage, the accused was identified as Govind Prem Prakash Verma, a resident of Ulhasnagar.

Speaking to Hindustan Times, sub-inspector Vijay Surv of Titwala police station said, "He was arrested on Wednesday and will be produced in court on Thursday. The accused said that he committed the crime under the influence of alcohol."

The alleged incident took place at 8.13 pm on Monday at Roz Wines shop at Maharal in Titwala. In his complaint, wine shop manager Laxmi Ahuja (42) claimed that the accused came to the shop and said he had paid Rs 500 to purchase alcohol.

"Ahuja denied this, saying that they had never seen the accused before. He asked Verma to wait till they checked the CCTV footage to clear the confusion. Instead of waiting, Verma left the shop and returned 15 minutes later with a hammer and scissors. He entered the shop and started assaulting Ahuja, another manager and shop owner Dharmapal Vanjani," a police officer said.

In the alleged assault, shop owner Vanjani, Ahuja and the other shop manager were injured and are undergoing treatment at a private hospital in Titwala. The Titwala police registered a case of assault and attempt to murder against Verma after verifying the entire incident on the CCTV footage of the shop.

Next Story : Govt must relook at concessions for senior citizens