sources said that now the movement of Chinese troops, vehicles, and new Chinese defenses are visible at the north and south banks of Pangong lake. 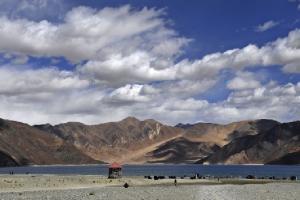 "Our troops have occupied some heights overlooking the positions occupied by PLA," said a source adding that it is a precautionary deployment instead of pre-emptive action.

Sources said Indian Army troops that specialise in mountain warfare had managed to take over these vantage points north and south of Pangong lake.

Sources said that now the movement of Chinese troops, vehicles, and new Chinese defenses are visible at the north and south banks of Pangong lake. In some places, heavily-armed troops are in close proximity.

The troops are not on high alert at these positions.

The Indian Army has clearly pointed out that its forces will retaliate if Chinese troops make provocative military moves.

The Indian Army has occupied heights that allow it to dominate the Chinese Moldo garrison and the Spangur Gap under Chinese control. Both India and China lay claim to some of these heights.

One of the most critical heights the Indian Army is manning is the Rechin La, which the Chinese are protesting against. The Chinese have made multiple attempts to dislodge Indian troops from the mountain heights.

The north bank of the lake is divided into 8 fingers that are contested by both sides.

India claims the LAC at Finger 8 and had been holding on to the area till Finger 4 but in a clear alteration of status quo the Chinese have been camping at Finger 4 and have set up fortifications between Finger 5 and 8.

It has become the new friction point where the Indian Army seems to be in an advantageous position.

India and China are engaged in a four-month-long standoff at the LAC in eastern Ladakh. Despite several levels of dialogue, there has not been any breakthrough and the deadlock continues.

Next Story : India had 64 lakh COVID-19 infections by May: ICMR sero survey