But it does lead to the important question on the difference between 'shakti' and 'shaktiman'. Shakti being the object and shaktiman being the subject that controls the object 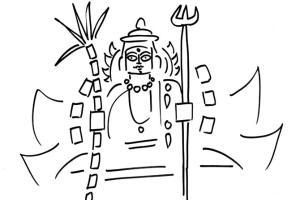 I was recently trolled by a group of people. This was because I apparently had stated a claim that women are not powerful in India. I tried to figure out from where they had derived this alleged statement of mine and eventually realised that I had made a statement where I said that the word 'shakti' is feminine, and the word 'shaktiman' is masculine. Now, while we use the feminine form to talk about power, we use the male form to represent the powerful. So, it was this sentence which was misquoted—as usual—by trolls, saying that Devdutt claims that women are not powerful in Hinduism.

Of course, one cannot do anything about the unique way of understanding trolls possess. This faculty twists and turns based on whoever happens to be paying them. But it does lead to the important question on the difference between 'shakti' and 'shaktiman'. Shakti being the object and shaktiman being the subject that controls the object.

This idea is a recurring theme in Hinduism. In Hinduism, we often refer to the Hindu trinity. The male Hindu trinity is associated with creating, sustaining and destroying. In a language, these feature as verbs; hence, they convey a subject in action. While the female trinity of Lakshmi, Saraswati and Durga are associated with wealth, knowledge and power, respectively. These are essentially nouns, and most importantly inanimate objects, in contrast to the male deities, who are 'verbs' playing active role as sentient beings who are creating, sustaining destroying.

Male deities thus embody the mind—that which creates, sustains and destroys. Female deities embody the matter/stuff/object which is created, sustained and destroyed—wealth, knowledge and power. Therefore, one can see a kind of a gender divide between nouns and verbs, between passive objects and active subjects, which is reflected in words like Shakti and Shaktiman.

In Tantrik thought, we are constantly taught that every god has a Shakti without whom he cannot be powerful, in other words, Vinayak has Vinayaki, Indra has Indrayani. Indrayani then becomes that tool or object that attributes divinity to the god. Thus, we see gender used as a metaphor to explain the relationship between the sentient subject and the insentient instrument. The sentient being seeks wealth, power and knowledge. The sentient being can be wealthy, powerful and knowledgeable. But wealth, power and knowledge can neither create themselves, not sustain or destroy themselves.

At a very philosophical and metaphysical level, these are gender-neutral ideas that are being communicated using gendered forms. Unfortunately, the form overpowers our mind and we start believing that the action 'is' masculine and the passive object 'is' feminine. Therefore, we assume that stories of Lakshmi are stories about women and stories of Shiva are stories about men, which is not what the Puranas are communicating. What they are communicating is this—the gods are within us, the goddesses are what we seek, consume and possess. The gods enable us; the goddesses sustain us. The gods activate us; the goddess is what we see.

The author writes and lectures on the relevance of mythology in modern times. Reach him at devdutt.pattanaik@ mid-day.com

Next Story : Your fare lady