Have you seen these candid pictures of the veteran actress Tanuja?

It's veteran actress Tanuja's birthday today. As the actress turns 79 on September 23, 2020, here's a look at some of her candid pictures with her family. 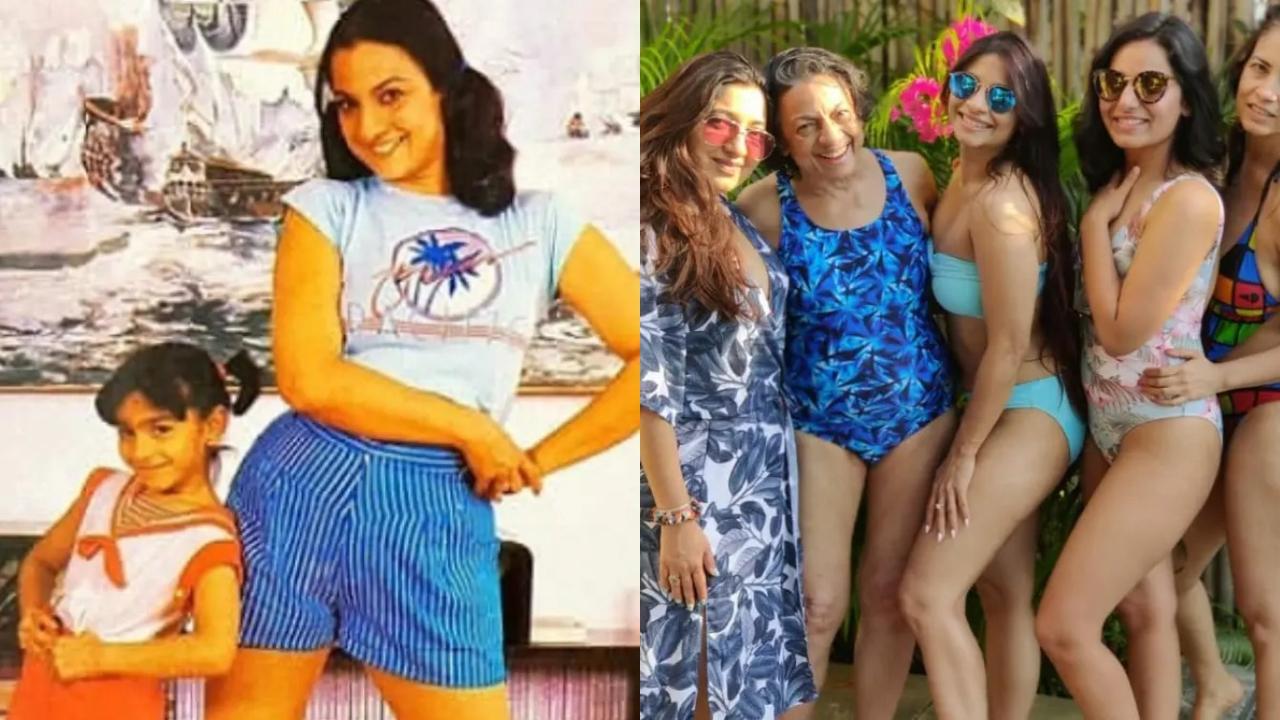 Tanuja Samarth Mukherjee: Have you seen these candid pictures of the veteran actress? 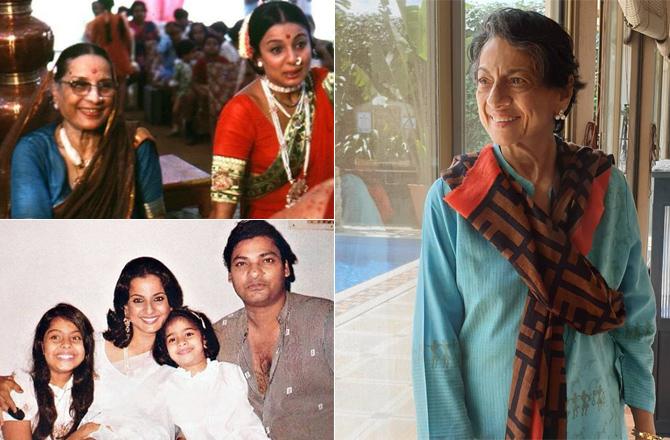 Tanuja Samarth Mukherjee, popularly known as Tanuja, was born in a Maharashtrian family to filmmaker Kumarsen Samarth and actress Shobhna Samarth on September 23, 1943. Tanuja had three siblings - two sisters and one brother. Late actress Nutan was the eldest of the four siblings. Tanuja's parents separated after her brother Jaideep was born. (All photos/mid-day archives, Instagram account of Tanishaa Mukerji and Kajol) 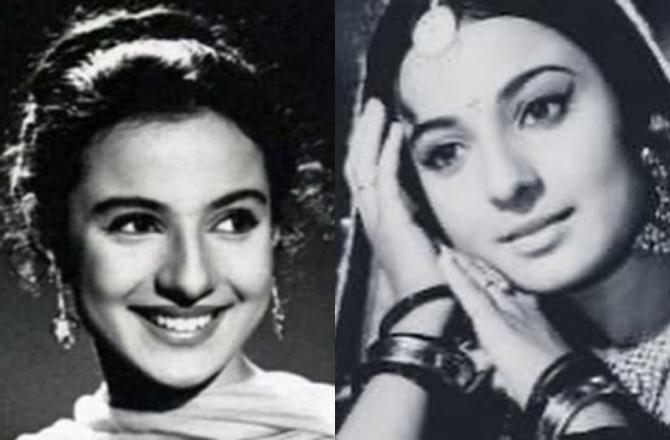 Tanuja's grandmother, Rattan Bai, and aunt Nalini Jaywant were also actresses. "My mother and grandmother have been very important people in my life. They've taught me how to love and respect others," Tanuja, who started her film career with her sister Nutan in Hamari Beti (1950) as Baby Tanuja, had once stated. 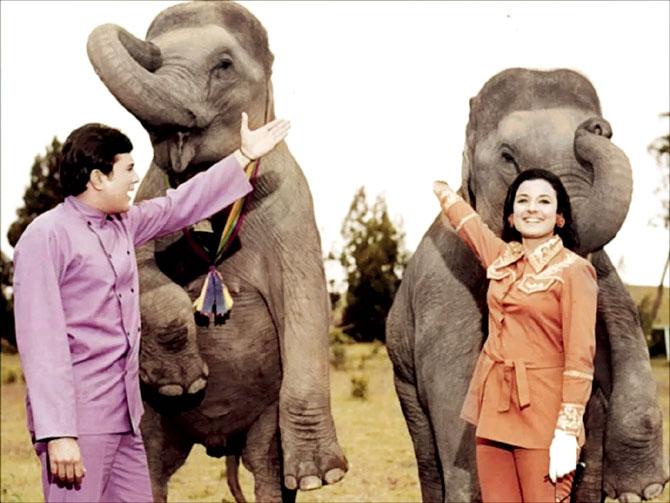 10 years later, Tanuja debuted in the film Chhabili (1960) as an adult, which was directed by her mother Shobhana Samarth and had her sister Nutan, in the lead. But it was Hamari Yaad Aayegi (1961) that truly marked her transition to a Hindi film heroine. 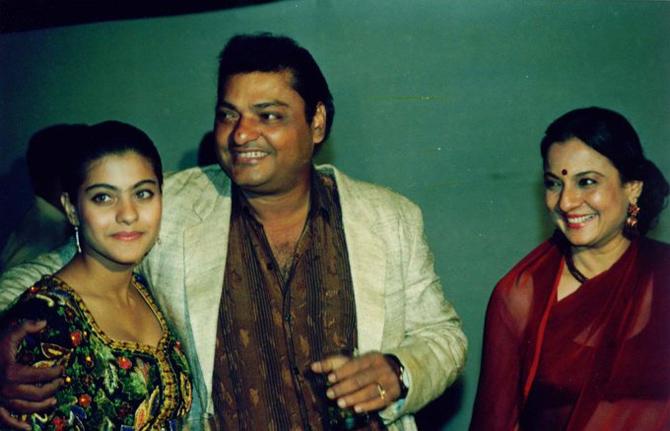 Tanuja married filmmaker Shomu Mukherjee in 1973. A year after their marriage, the couple was blessed with a baby girl - daughter Kajol. Tanuja gave birth to a second child - daughter Tanishaa Mukerji in 1978. 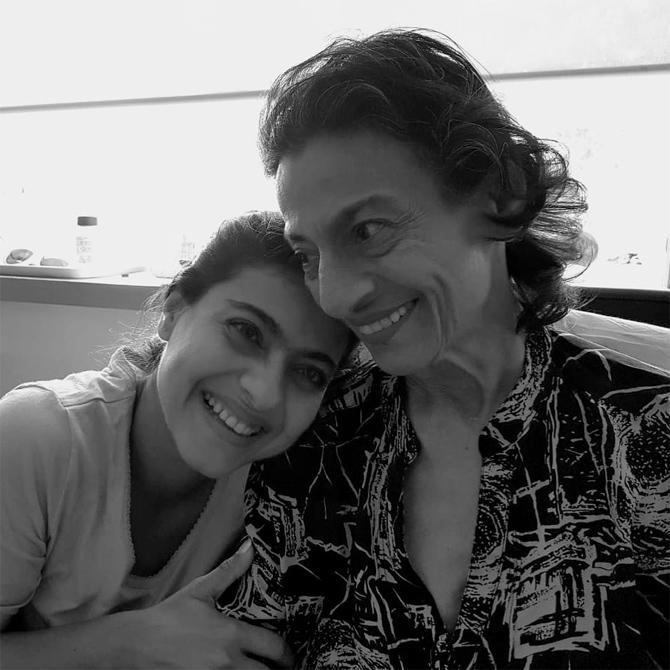 A mother always has interesting tales of her daughters and so, when asked Tanuja about Kajol's childhood, the yesteryear's' star was quick to narrate a particularly funny one. She said, "Kajol once came to my room and asked me how to boil water. I told her to take a pot, take some water in it and put it on the stove. She disappeared for an hour, so I called her back to ask what happened. She came back complaining that the water just wouldn’t heat up. I figured that she must have not put the stove on. And I was right. She put the blame on me saying I never included that bit in my instructions (giggles)." We are sure Tanuja had fun raising Kajol! 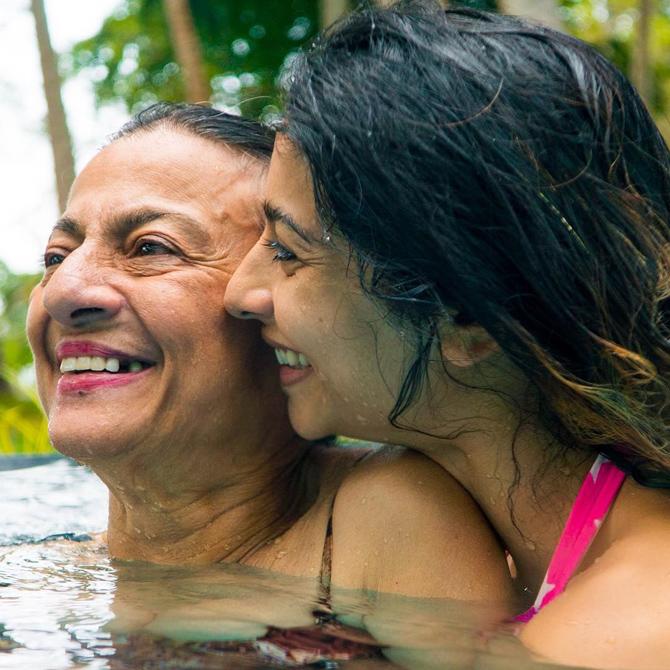 Other than films, it is food that bonds yesteryear actor Tanuja and her two daughters. The lady told mid-day once, "I am a foodie and an enthusiastic cook. However, my daughters are total opposites of each other. While Kajol is not so interested in cooking, Tanisha has been doing the rounds of the kitchen since a very young age." 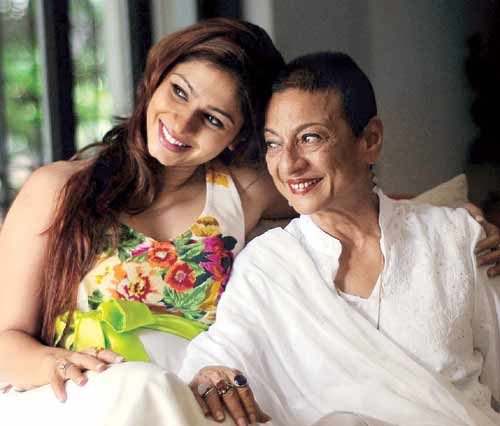 She continued further, "In fact, there have been times when Tanishaa has called me from abroad to know how to cook a particular dish. Then, I would keep her on hold and ask my mom. She would then keep me on hold and ask her cook (laughs out loud). It used to be hilarious!" 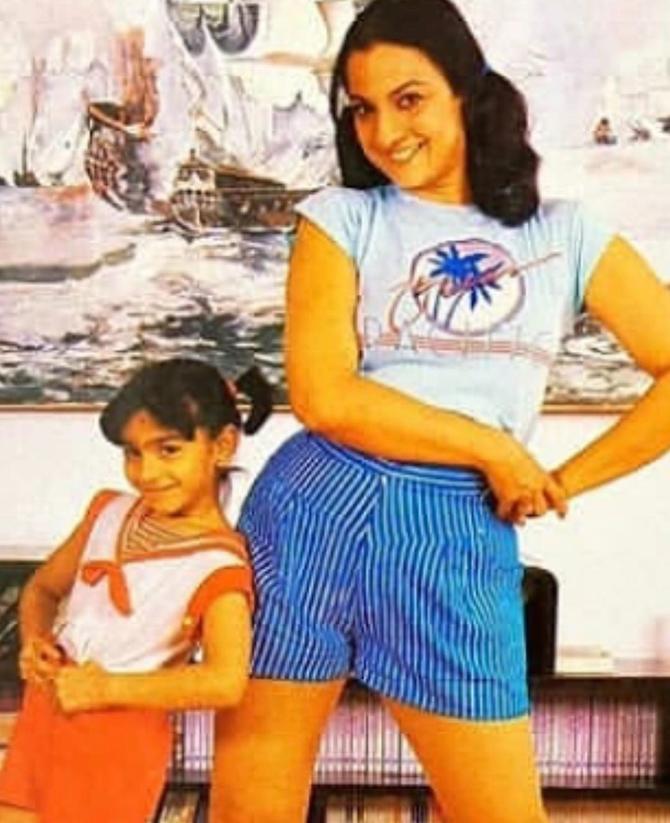 Reminiscing her childhood days, Tanuja's daughter Tanishaa Mukerji was quoted saying, "When my mum was an actress, I was in boarding school and was treated like a normal kid. But many people including the nuns in the school would say, 'Your mom's so much fun. She's so well-spoken. She knows so much about life." 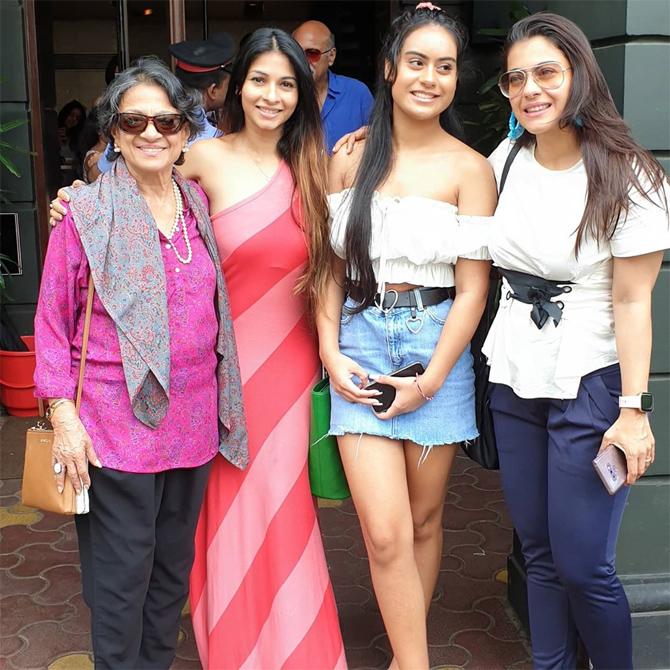 Tanuja shares a warm and friendly relation with her daughters Kajol and Tanishaa. "Like any mother and daughters, the three of us have fought like cats and dogs. But I have always told them, 'Fight, but sort it out before sleeping so that you sleep with a clear conscience. If you have done something, clear it out with the person'," said Tanuja. 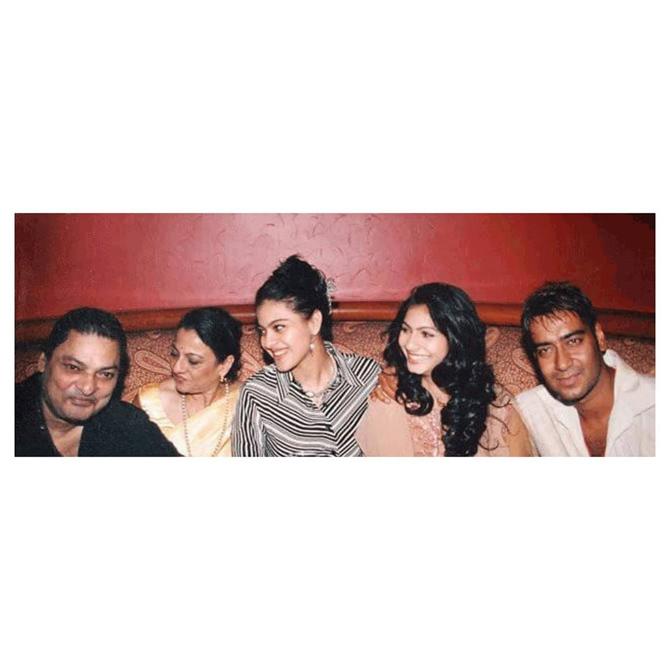 Bollywood star Ajay Devgn is Tanuja's son-in-law, as the former married Kajol in 1999. Tanuja and Shomu Mukherjee became grandparents, as Kajol gave birth to Nysa in 2003. Shomu Mukherjee passed away (in 2008). He couldn't see his second grandchild Yug Devgan, who was born in 2010. 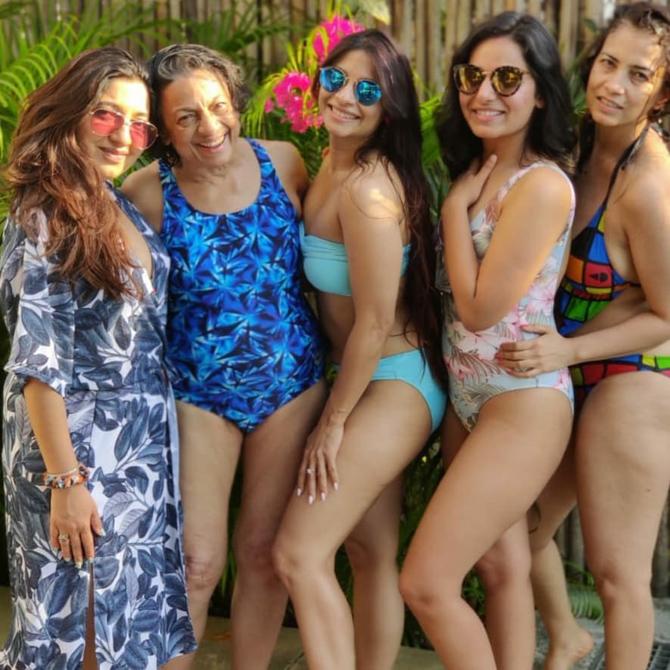 At 77, Tanuja, grandmother of two, is living her life to the fullest and this picture is proof enough. Isn't she killing it in chic swimwear? The stunning Tanuja looks lovely as always. 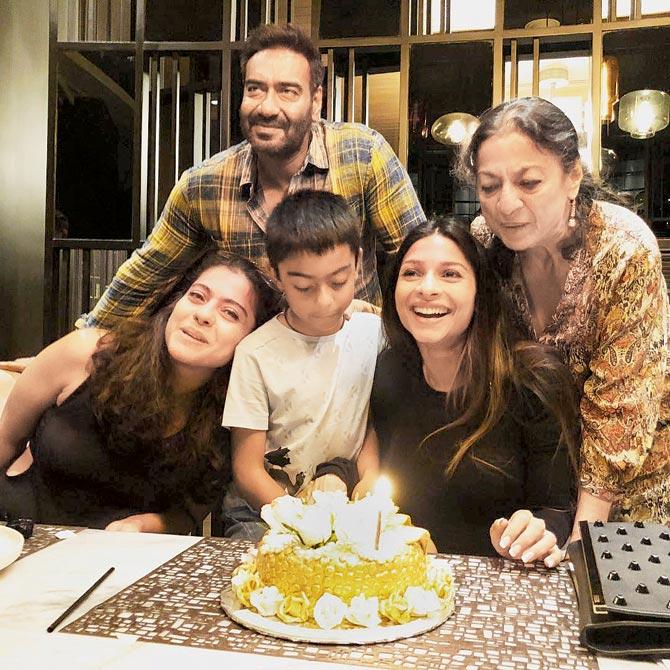