It's hard to fathom whom this film was made for. Perhaps folks who need a fix of some mindless action and thrills will find this passably interesting, but for those looking for something more meaningful, 'No Escape' is a deterrent 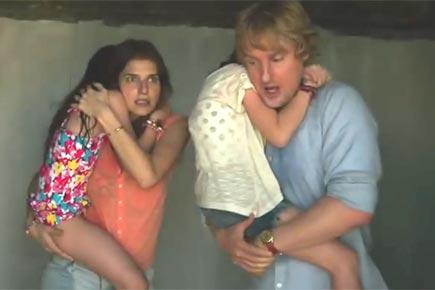 Talk about an unlikely casting – Owen Wilson, who has only appeared in comedies in which he basically plays himself put in a taut B-movie type thriller. Pierce Brosnan, with a history of big budget Bond films put in the same film, along with Lake Bell paired opposite Wilson. This is a strange combination, and the film that they appear in is equally mismatched.

Watch the trailer of 'No Escape'

The title 'No Escape' sounds like a B-movie and the film is exactly that, except that it thinks it is an A-movie. The plot is simple – Wilson is an American who shifts with his family to a South East Asian country for work, and on the first day of work turmoil grips the country. A massive bloodbath ensues as the country's prime minister is assassinated and a revolution kicks in, and the American family is stuck in crossfire. The remainder of the film follows the family running and hiding, trying to remain alive, even kicking ass wherever necessary.

Here's the thing – the film is directed by John Erick Dowdle who has previously made the crappy horror films 'As Above So Below' and 'Devil' – both of which had interesting premises but were butchered by the shallow execution. The same problem carries over to this film. A better filmmaker would have turned this plot into a smart and breathless thrill ride (like the British thriller '71 which had a similar plot) but Dowdle dumbs things down to the lowest common denominator.

The country is unnamed but it is supposed to be somewhere near Vietnam. But this political correctness is offset because the bad guys in the movie want to kill our heroes only because they're American. There is little exploration of what is going on and who the rebels are fighting for, or what this skirmish means to world politics. We just get an endless parade of nameless Asian gangsters coming every five minutes trying to hack this white family to pieces. There's no nuance, or subtext, or intelligence - it's just a demo of the big bad third world versus the beauteous first world, and a father trying his best to save his wife and his daughters. In fact the baddies in the film are so terribly one dimensional they make first person shooter video game extras seem more nuanced.

It's hard to fathom whom this film was made for. Perhaps folks who need a fix of some mindless action and thrills will find this passably interesting, but for those looking for something more meaningful, 'No Escape' is a deterrent.

Next Story : 'Ricki and the Flash' - Movie Review