'The Hateful Eight' is basically 19th-century violence set in desolate location engulfed by a strongly windy, snowy, blizzard shot in 20th-century style with the best of hi-tech showy effects. While the technique is painstaking and old fashioned , the telling of it is postmodern and visually exciting 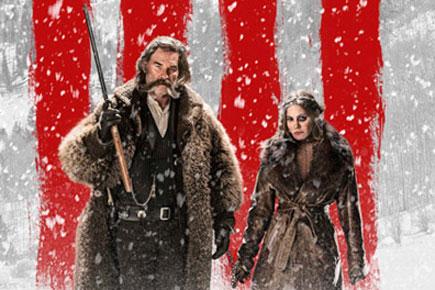 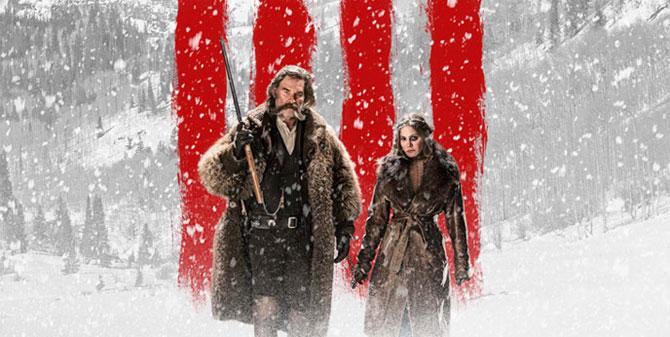 This is basically 19th-century violence set in desolate location engulfed by a strongly windy, snowy, blizzard shot in 20th-century style with the best of hi-tech showy effects. While the technique is painstaking and old fashioned , the telling of it is postmodern and visually exciting.

The setting is ancient by today's standards though not by any stretch of imagination, does it veer away from Tarantino's own preoccupations with the past ('Inglourious Basterds' ,'Django Unchained'). This one takes place a few years after the Civil War, in a snowy, desolate stretch of Wyoming; the kind of place where trouble comes galloping in.

Major Marquis Warren (Samuel L. Jackson) a former Union soldier turned bounty hunter, is the first to enter the frame. He's looking for transportation into nearby Red Rock for him and three – passengers. And Minnie's haberdashery is the pit-stop meant for a recoup.

John "Hangman" Ruth (Kurt Russell) and his quarry crazy Daisy Domergue (Jennifer Jason Leigh), along with James Parks as the coach driver, and Walton Goggins as Chris Mannix, the soon-to-be sheriff of Red Rock join him enroute to Minnie's. But Minnie is not in attendance there. In her stead, a Mexican housekeeper (Demian Bichir); a crusty Confederate general (Bruce Dern); a tight-lipped cowboy (Michael Madsen); and a voluble Englishman (Tim Roth) are in attendance.

A closed space, a set of violent brutal men and loads of ammunition can only mean one thing- and that's a shootout or several of them. Given Tarantino's preference for gut-curdling violence in stylized form, there’s no guessing wrong about which way this could go.

While the blustery, windy and snowbound weather conditions ensure their forced proximity in claustrophobic settings, the civil war divide ensures that each one has an axe to grind and each must therefore look out for himself. Friends, foes and allegiances can only be temporary and dependent on strategies for survival. As things get messier in real time, Tarantino takes us back through a flashback and suddenly turns things all around.

A few more characters enter the frame with newer motivations and much stronger reasons to kill make for a brutal assault that leaves everyone dead or nearly there. Bullets, blood, internals, bones, brains are blown away in splatters leaving you revolted and reeling. It’s all too convenient a set-up and really doesn't go anywhere new in terms of narrative craft. That Tarantino decided to harken back to the past in terms of technique, speaks volumes about the respect he has for film technicians of yore.

The mystery is mysteriously threadbare, the chapter breaks are momentum breakers and the ethnic slurs leave a bad taste. The violence is of course gratuitous and gimmicky. The visuals garner attention but what's the point? It's hard to figure!