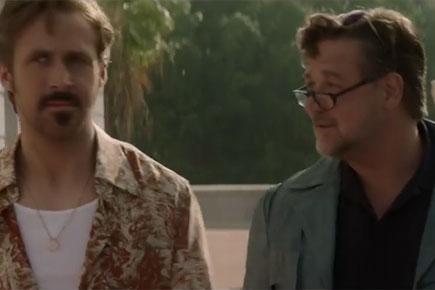 Writer/director Shane Black is a veteran at laugh worthy buddy-cop movies. After earning his spurs with 'Lethal Weapon 1 & 2', he continued his merry run at the box office with 'The Last Boy Scout' and 'Kiss Kiss Bang Bang' and then followed it up with 'Iron Man 3'. This return to roots initiative with steady Producer Joel Silver , brings him back to his old groove- cruising the streets of Los Angeles to mine a crime thriller, action comedy with a P.I , his daughter and a Punch man in a sort of three's company of misfits meant to do stupid things and bag the laughs.

Watch the trailer of 'The Nice Guys'

The set-up is quite convoluted, unconvincing and extremely farcical. The slap-stick intent is a given. While the sight gags are intermittently funny, the plotting is sloppy and the editing keeps the fast pace going without allowing for any sense or logic to creep in. Buffaloing appears to be the key to getting things done, so the three main characters indulge themselves quite frenetically in the act. The father-daughter Buddy concept might be fresh but it's not the mainstay here. There's a third Buddy in the form of Healy who is the steadfast guy here.

The narrative is showy and self-aware suggesting a Coen Brothers' impression but the lack of depth and shoddy form makes it a fleeting one at best. The slapstick is pretty dumb but that doesn't limit the fun though. The funniest moments in 'The Nice Guys' are when someone tries to do something cool and fails miserably. There's nastiness, plenty of brash swagger, speedy action and plenty of wild goose chases before the narrative can veer to a climax. The writing may not be entirely up to the mark but the actors more than make up for the deficit. Crowe, Gosling and Angourie Rice make the ensuing mayhem look entertaining enough. Despite Shane Black's penchant for the absurd, it's still very much a joy ride!