Jade Thirlwall, a member of British band Little Mix, is upset over her pregnancy rumours -- something which has inspired her to prepare her new song Strip 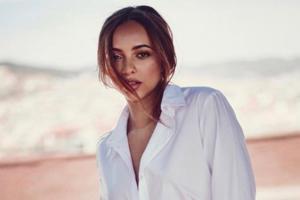 
Jade Thirlwall, a member of British band Little Mix, is upset over her pregnancy rumours -- something which has inspired her to prepare her new song Strip. In an interview to the Times magazine, Thirwall said: "We were going into the studio one day and we did look a bit rough...And lo and behold, there was an online article the next morning, with comments like: 'Is Jade pregnant? Look how fat she is,' and, ‘Don't they look ugly'.

The video for the song, which was the inspired by the incident, shows the Little Mix girls posing totally naked with slurs written all over their bodies. Thirwall has the words "talentless", "s**tty", "bossy" and "geek" etched on her body. She has been dating The Struts bassist Jed Elliott since the beginning of 2016. The "Black Magic" hitmaker had previously opened up about their romance, admitting it was "love at first sight".

Next Story : Rachel Weisz shows of her post baby body