Madonna drinks a cup of urine after taking ice bath

It's not the first time Madonna has used urine as a medical treatment. She previously admitted to urinating on her own feet to ward off athlete's foot in the past. 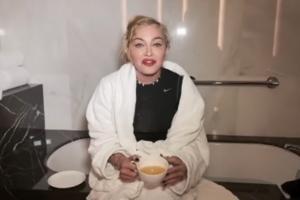 A screengrab from the video shared by Madonna on Instagram


Singer Madonna shared a clip of her unusual post-show routine, which includes taking an ice bath and drinking a cup of her own urine.

She posted the video on her Instagram TV page on Sunday, November 17, reports aceshowbiz.com.

The 61-year-old singer is currently in the midst of her "Madame X Tour", and documented her 3 a.m. ritual for fans on the social networking site.

"Shall we start an ice bath challenge? 41 degrees. Best treatment for injuries," she penned alongside the clip of her sparring in her hotel bathroom with performer Ahlamalik Williams, before lowering herself into the ice-filled bath.

Dressed in a sports top and hot pants with rubber socks, Madonna sported a round bruise on her right forearm, before lowering her underwear to reveal another bruise on her leg.

After more than a minute of enduring the ice, the "Like a virgin" hitmaker pulled off her rubber socks to show the difference in the colour of her now red skin.

"That's so you know how cold it is," she said, while Ahlamalik enthused: "Much much respect."

The star then proceeded to drink a yellow liquid from a white teacup following her treatment, as she added: "It's really good to drink urine after you've got out of the frozen bath."

It's not the first time Madonna has used urine as a medical treatment. She previously admitted to urinating on her own feet to ward off athlete's foot in the past.

Next Story : Priyanka on working with Parineeti: We wanted to do something together