Kubbra on Emmys: I was hoping for a win. It's gutting that we didn't

From cheering for Nawazuddin Siddiqui to playing dress-up, Kubbra Sait on how Emmys was a night to remember for Sacred Games and Lust Stories team. 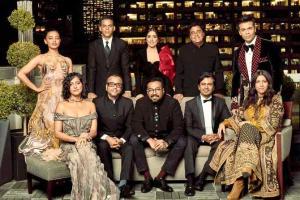 Makers and cast of Sacred Games and Lust Stories


"Realistically, I was hoping for a win. It's gutting that we didn't," says Kubbra Sait, when we connect with her a day after the International Emmy Awards 2019. The Indian contingent went into the night with several nominations — Sacred Games vied for the Best Drama nod, Lust Stories was nominated in the TV Movie/ Mini Series category, and Radhika Apte, in the Best Actress category. The golden statuette may have eluded them, but Sait — who played the memorable character Cuckoo in Sacred Games — says it was a night to remember.

"As Team India, we wanted to have fun regardless of the verdict. It would have been great had we won, but we didn't miss out on the fun either way. After the show, we all hit the bar, had a few drinks and surprisingly, retired early," laughs Sait, who was joined by the show's directors Anurag Kashyap and Vikramaditya Motwane, actors Nawazuddin Siddiqui and Radhika Apte at the event. The creative minds of Lust Stories — Karan Johar, Zoya Akhtar, Dibakar Banerjee, Ronnie Screwvala and Ashi Dua — too made their presence felt. "We dressed to the nines and laughed all night."

It was a big moment for Siddiqui as his McMafia edged past India's prestige drama to bag the Best Drama award. "When McMafia won, we all cheered for Nawaz. We were so happy for each other. It's the spirit of being there that mattered," she says, adding that seeing MJ Rodriguez and Christiane Amanpour in the flesh was the high point of the evening for her.