Solo A Star Wars Story is a prequel that takes you back in time to serve up the mythology with a refreshing reveal of what might have plagued the minds of fans for years altogether. 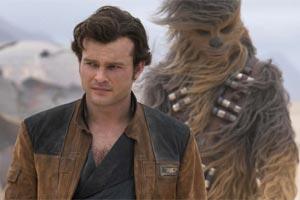 A still from Solo: A Star Wars Story

The fans of the Star Wars franchise are bound to be pleased. The many mysteries that led to the phenomenal myth-making are being revealed in this solo effort. It's a prequel that takes you back in time to serve up the mythology with a refreshing reveal of what might have plagued the minds of fans for years altogether.

This is a kind of movie that hits definite pre-ordained notes. And it all works up a lather just as we expected. It may not be a great adventure but it's thrilling nevertheless. If you've ever wondered how Han got Solo attached to his name, or his first meeting with Chewbacca, or him winning the Millennium Falcon in a card game from its original owner, Lando Calrissian, and making the Kessel Run in less than 12 parsecs, this is the movie giving it all away. We get to see them all when they were younger, as young adults no less, – and that's a definite plus too.

We meet young Han (Alden Ehrenreich) and his girlfriend and partner-in-crime Qi'ra (Emilia Clarke). After they are forced to part, Han signs up for the Imperial Navy but ends up serving in the infantry where he meets his future smuggling partners Val (Thandie Newton) and Tobias (Woody Harrelson). The setting is straight out of a World War I picture and there are symbolic nods to the old Western to be found too. We get to connect with the full arc of Han's life and we understand the import of every sentiment and emotion he goes through in the series. This film, in fact, fills up the empty spaces in the jigsaw puzzle.

It almost feels as though the filmmakers burned the midnight oil trying to find missing links to flower up this mythology. There are some engrossing sections which don't directly relate to Solo and his teammates. It's different from what we've seen before and there's enough cultural resonance from the past to keep you hooked. It's all served up with a panache that makes it cinematically alluring. The setups and payoffs are big sized- meant to make the referencing easier and obviously memorable. Energetic performances, casual humour, nostalgic back-flips add up to a rousing engagement.

Next Story : Candice Bergen: I was thrilled that they offered Sharon's character