More than the screenplay, it's the direction, treatment, superb camerawork and credibly underlined performance from the leading lady that helps work up some shivers here! 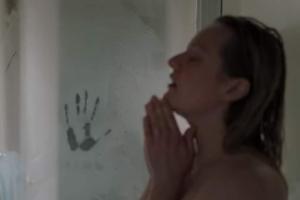 Leigh Whannell's makeover of the 1933 classic Universal monster movie, The Invisible Man has a #MeToo horror spin and bears little resemblance to the 1897 H.G. Wells novel that inspired it. In fact, the screenplay appears to be a combo write-up of Sleeping with the Enemy and The Invisible Man with some generic horror elements thrown in for effect. Whannell leaves out much of the original story elements, reworking the basic premise to suit a 2020 outlook.

When Cecilia's (Elisabeth Moss) abusive ex Adrian Griffin (Oliver Jackson-Cohen), a brilliant scientist specializing in optics, takes his own life and leaves her his fortune (under certain conditions), she goes with the flow, little suspecting the trauma that awaits her thereafter. Her sister, Emily (Harriet Dyer), her friend, James (Aldis Hodge) and James' teenage daughter, Sydney (Storm Reid) find it easier to believe that she is going bonkers. A series of coincidences turn lethal and Cecilia becomes the typical unhinged suspect the police zero in on.

Leigh Whannell, writer of films like Saw and Insidious, credited here with story, screenplay and direction builds up a fairly gritty, taut and atmospheric series of startling, tense moments as Cecilia appears to come unhinged. Whannell's screenplay concentrates on investing his characters with believable emotional arcs. Elisabeth Moss's convincing essay of a traumatised mind becomes imminently believable in such a scenario.

The opening sequence is the most intriguing one in the entire film. Cecilia is in the process of orchestrating an escape from the house she shares with her controlling, abusive lover. The use of surveillance footage and the panning camera suggests possibilities that you might at first overlook. The opening view of the crashing of waves against a post-modern ocean view mansion is majestic.

Whannell's narrative is breathtakingly suspenseful for most of its runtime. Unfortunately, the endplay fritters it all away. It feels rather familiar, twisty and more in keeping with genre tricks than realism. While the shocks are limited, they come at times when you are least expecting them. More than the screenplay, it's the direction, treatment, superb camerawork and credibly underlined performance from the leading lady that helps work up some shivers here!

Next Story : Courteney Cox all jazzed up for reunion special episode of Friends