Davis has been keeping it bright and colourful throughout awards season, wearing a multicolour printed Lavie By CK for the Golden Globes and chose an electric green hue for her custom Louis Vuitton column gown as a symbol of positivity at the SAG Awards. 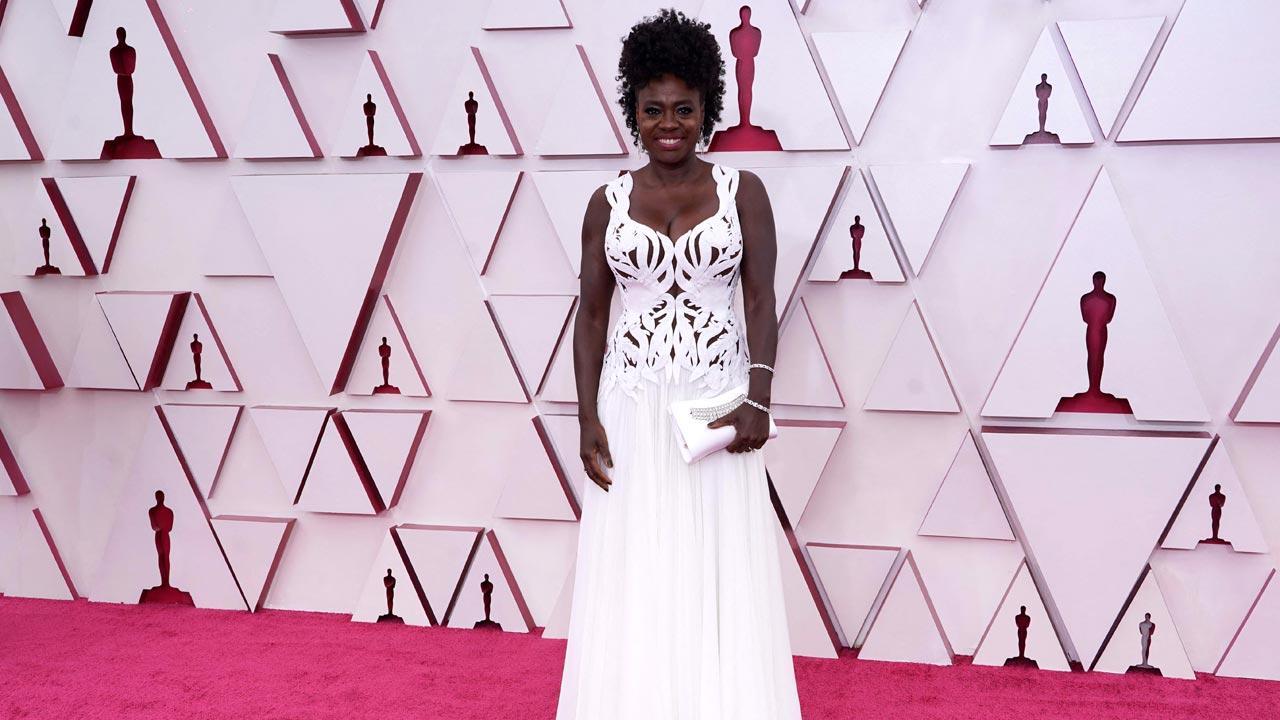 US actress Viola Davis, nominated for Actress in a Leading Role for "Ma Rainey's Black Bottom", arrives at the Oscars on April 25, 2021, at Union Station in Los Angeles. Pic/AFP


American actor-producer Viola Davis, who is nominated for an Oscar in the Best Actress category for her role in 'Ma Rainey's Black Bottom', arrived at the ceremony looking her fashionable best. For the Academy Awards this year, she brought her bold style aesthetic to the red carpet. While the 55-year-old nominee has been leaning into bright colours throughout the award season, she went back to basics for the Oscars, wearing a flowing white Alexander McQueen gown with a cutout bodice design and Forevermark diamond drop earrings, reported People magazine.

Davis kept her makeup look natural to give a luminous, glowy effect while rocking her natural coils in a pompadour-style up-do. Before any award show, Davis likes to create a serene environment in her home as she gets ready with her glam squad and family by her side.

"We have music playing in the house before everyone gets here. It used to be R&B classics. Now it's the Calm App," Davis told People magazine when discussing her new L'Oreal Paris Voluminous Mascara campaign.

"There are diffusers and candles in every room. All the windows [and] the shades are drawn down so the light is coming in. And I always have some kind of new food for them to try. Last time [for the NAACP Image Awards] it was keto bread. That's how we start," the actor continued.

Davis has been keeping it bright and colourful throughout awards season, wearing a multicolour printed Lavie By CK for the Golden Globes and chose an electric green hue for her custom Louis Vuitton column gown as a symbol of positivity at the SAG Awards.

Davis' nomination in the Best Actress category for her performance in 'Ma Rainey's Black Bottom' marks her fourth Academy Award nomination, which broke her own record as the most nominated Black actress ever at the Oscars.

She first earned the honor in 2017 when she was nominated for Best Supporting Actress for her role in Fences. She went on to win in that category, marking her first Oscars win.

The 93rd Academy Awards are being held at both the Dolby Theatre and Union Station. The ceremony is taking place two months later than originally planned, due to the impact left by the COVID-19 pandemic on the entertainment industry.

'Mank' leads the nominations this year after being nominated for 10 accolades whille 'The Father', 'Judas and the Black Messiah', 'Minari', 'Nomadland', 'Sound of Metal' and 'The Trial of Chicago 7' have been nominated in six categories.