Usha Rani was reportedly was suffering from a kidney-related ailment. Her last rites were performed in Chennai, on Sunday evening. 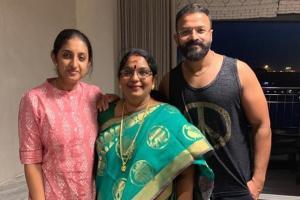 
Usha Rani, the south Indian actress, passed away on Sunday, June 21 in Chennai. She was 62. The veteran actress, who was known for her supporting roles in various Tamil and Malayam films, was reportedly was suffering from a kidney-related ailment. Her last rites were performed in Chennai, on Sunday evening.

Usha Rani was married to late director N Sankaran Nair, who was thirty years older to her. The latter passed away in 2006. In a career spanning over five decades, Usha Rani had acted in more than 100 films, the majority of which were Malayalam films.

Many Mollywood actors took to social media to offer condolence and express their grief over the loss. Actor Prithviraj Sukumaran took to Instagram to mourn the loss of Usha Rani. He posted a photo of the late actress and wrote, "Condolences. Rest in peace (sic)."

Actor Jayasurya too shared a picture of Usha Rani on Instagram, and offered his condolences:

Actor Tovino Thomas, Aju Varghese, were amongst the other celebrities who mourned the loss of Usha Rani on social media.

Our heartfelt condolences to her near ones!

Next Story : Arya, Malavika, and other celebs wish 'Thalapathy' Vijay on birthday