Tamannaah Bhatia has been a part of showbiz since her early teens. A majority of her films have been in Tamil and Telugu, but she has done a fair share of Hindi and Kannada films too 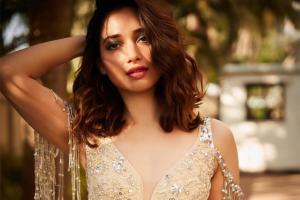 
Down with two releases already in 2019, Tamannaah Bhatia has a growing kitty of projects across genres and languages. The actress says being a part of epic two-part drama "Baahubali" not just made her adventurous physically, but also brave in terms of decision making in life.

The actress had a candid conversation with Famously Filmfare, and she revealed a lot about her professional life.

How Tamannaah Bhatia got her first Telugu film

"I feel I'm feminine mostly. I like something feminine, flirty at the same time, I like formal. Like you will find me wearing a shirt versus a casual outfit. I mean I feel casual in a formal outfit. That's my comfort"

"Because you watch Hindi movies. In Hindi movies, the top actresses do item numbers and they are so gracefully done. And we all love those songs, when we are in parties, or with friends, we dance on these songs, we sing and enjoy the song. So, I don't see anything wrong with it. I think, before I did those songs people would think that a particular heroine's career is coming to an end, she is not getting movies, so she is doing such songs. I was like, no, I'm doing it while I'm in my peak. I don't want to do it when people think it's not a good thing to do because I love doing it, I love watching those songs. Those songs are an inspiration. When we watch Katrina Kaif, we feel like having such a body. We feel like dancing like her. It is also a kind of performance. It's not like you are yourself because nobody wakes up feeling like that."

Tamannaah thinks Rana should have been THIS if not an actor

"His marketing skills are amazing. If he was not an actor, or if he would do anything apart from that, I think something in marketing."

Next Story : TV actress Ketaki Chitale: I was kicked out of show for having epilepsy