Edited by textile scholar and revivalist Jasleen Dhamija, the new book Sacred Textiles of India talks about fabrics and crafts that play an important role as a part of various religious and cultural ceremonies 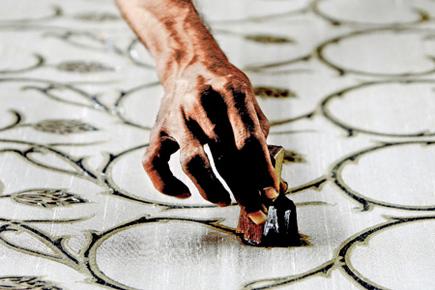 
Q. You mention in the book that the topic of sacred textiles would require volumes to cover the whole subject. How did you select elements for the book?
A. I generally selected these areas about which not much has been written before. One example is the Parsi tradition of wearing the kusti (sacred cord) and sudreh, which have been a part of their lives for several years. Even today, Parsi women will wear very sophisticated versions of the sudreh to functions and parties without us realising it. 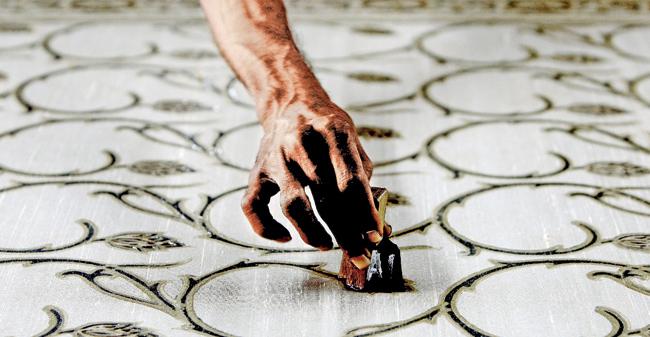 This is what we wanted to discuss in the book, that such textile traditions are very much alive today. What is interesting about these traditions is that the people who create it are not necessarily professionals. They are the makers, producers and even the priests. One such example is the Bhopa of the Vaghari tribe who first take a ritual bath, create the Mata Ni Pachedi on the cloth that serves as the temple and urges the goddess to reside in the shrine. Sometimes, the goddess takes over him when he finishes the piece. 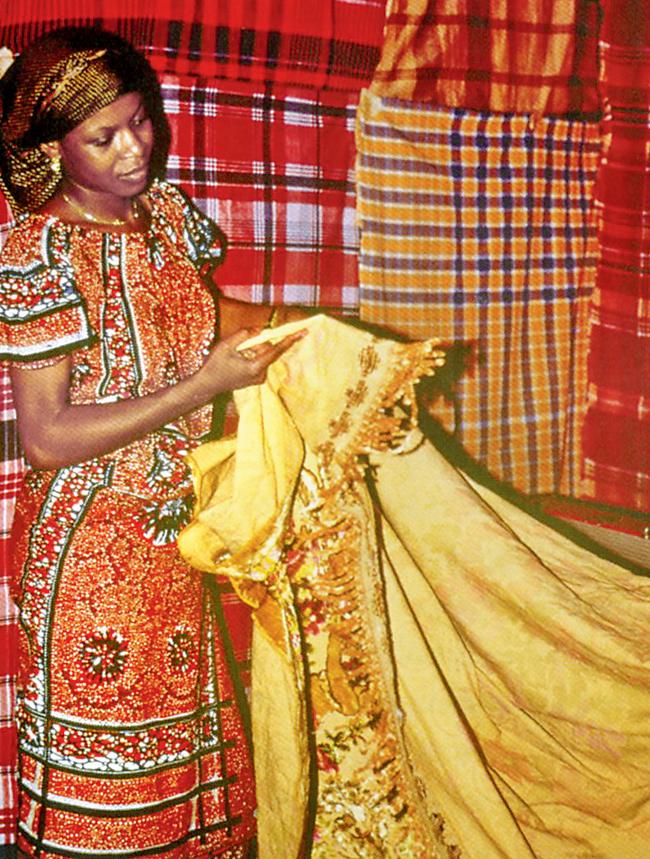 Women usually choose the textiles to prepare the rooms and the beds for the corpse to lie in state, the first of which has its walls and bed covered with Indian madras. The young woman holds a canopy fabric to hang over the madras covered bed. Buguma, 1980. Photograph by Joanne B Eicher

Q. Could you give our readers a few examples of sacred textiles that haven’t been mentioned in the book?
A. In Assam, worshippers of Krishna create the Vrindavani embroidery. In Tamil Nadu, ritual textiles were made out of felt and used as decorative textiles for ratha processions of gods and temples. They were used even on door panels and entrances to temples. Later, they started making these out of cotton and today, they use a style of Kalamkari to print it. A lot has been written about Kalamkari, which is why it was one of the traditions that we haven’t mentioned in the book. There’s an interesting section that talks about Indian textiles exported abroad and how they have become a part of the customs and rituals in countries in South East Asia and Africa. The Madras Checks textile, known as Real Madras Handkerchief (though it isn’t a handkerchief) has been a part of the rituals in western Africa since 200 years now, since the British and the French got them there. It is used for customs ranging from the birth of a child to death. Even today, we have people from Nigeria who come to India to source this fabric, sometimes, with the photo of the person who will be installed as the chief. This photo is then woven into the textile and people wear it as skirts. Once Kamaladevi Chattopadhyay (a pioneer of Indian textiles) bought pieces of this fabric from her trip to Nigeria thinking that it was their local textile. Once here, she got to know that it was exported from India. Even an expert of her status assumed that the textile belonged to Africa; it’s such an important part of their traditions. 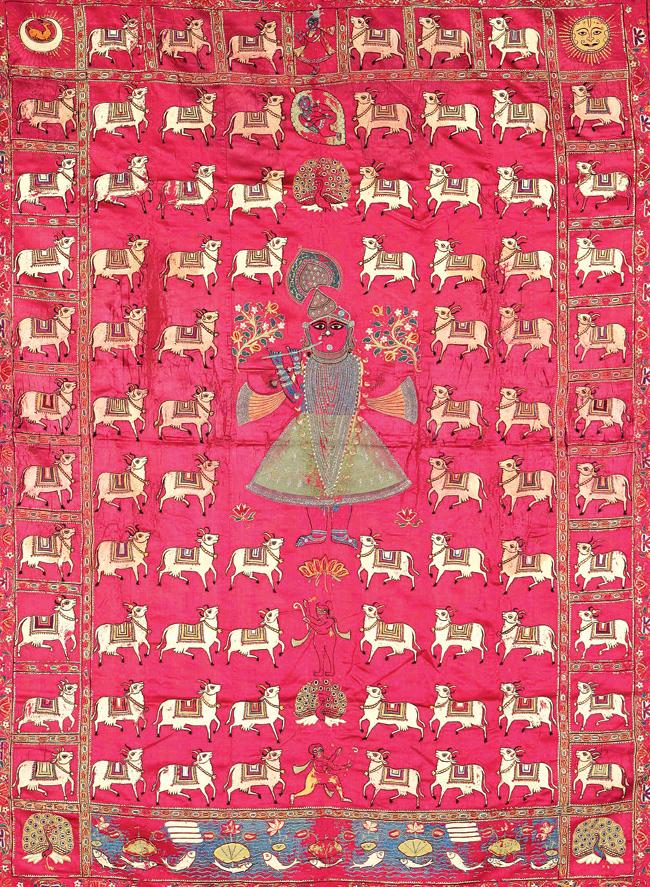 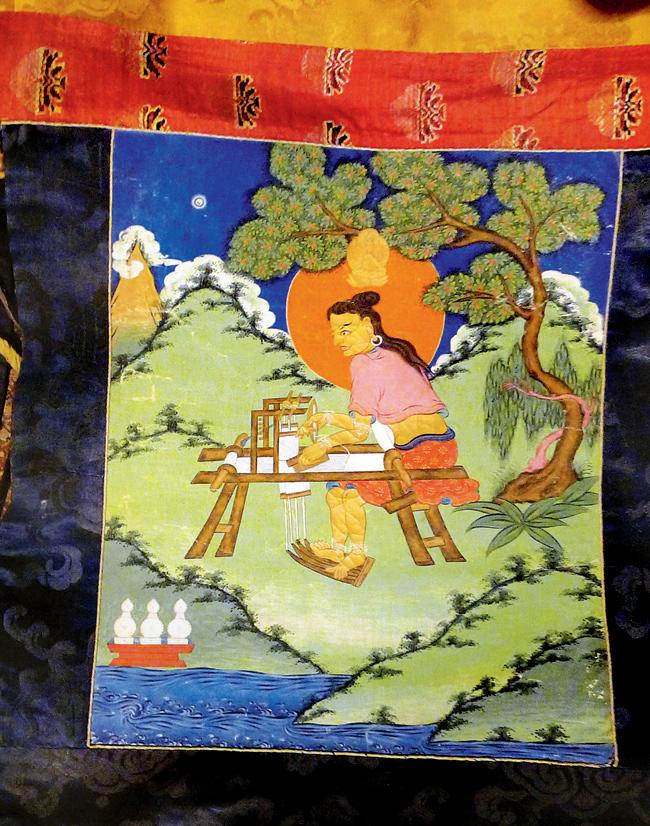 Mahasiddha working on foot loom, depicted on a thangka at Likir Monastery, late 18th or early 19th century. This is a part of a series of thangkas of the 84 mahasiddhas, stitched together along the top. Photograph by Monisha Ahmed. Pics courtesy/The Marg Foundation

Q. Tell us a bit about the importance of textiles in rituals in Maharashtra.
A. Originally, the real Paithani sari in green was gifted to a woman in her seventh month of pregnancy as it was thought to protect the mother and the baby. The colour yellow represents introspection, hence the bride wears yellow. In India, yellow has always been the colour to be worn by the bride in various regions; red is a relatively new fashion. 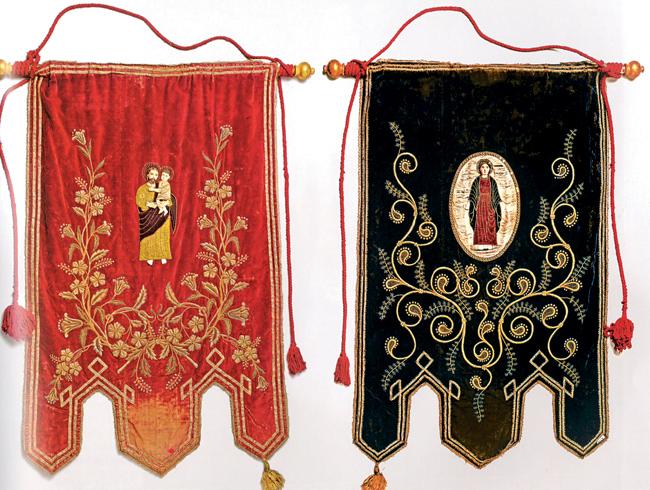 18th-century church banners. The use of ivory on cloth is unique worldwide. Courtesy Museum of Christian Art, Old Goa. Photograph by Denzil Sequeira. 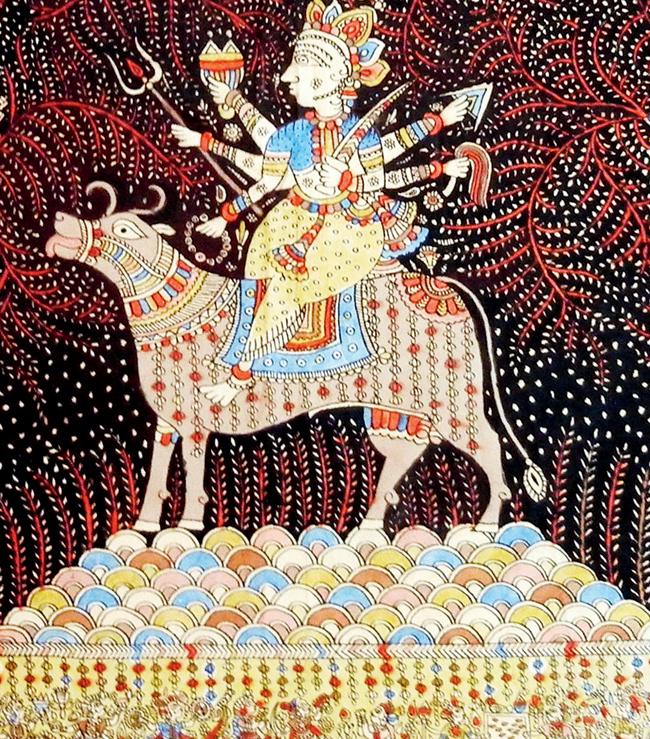 Q. Which is the most endangered sacred textile in India today?
A. The Patan Patola, a style of double Ikat and the most complex weave in the world, has only two of the original weaver families pursuing the craft today. 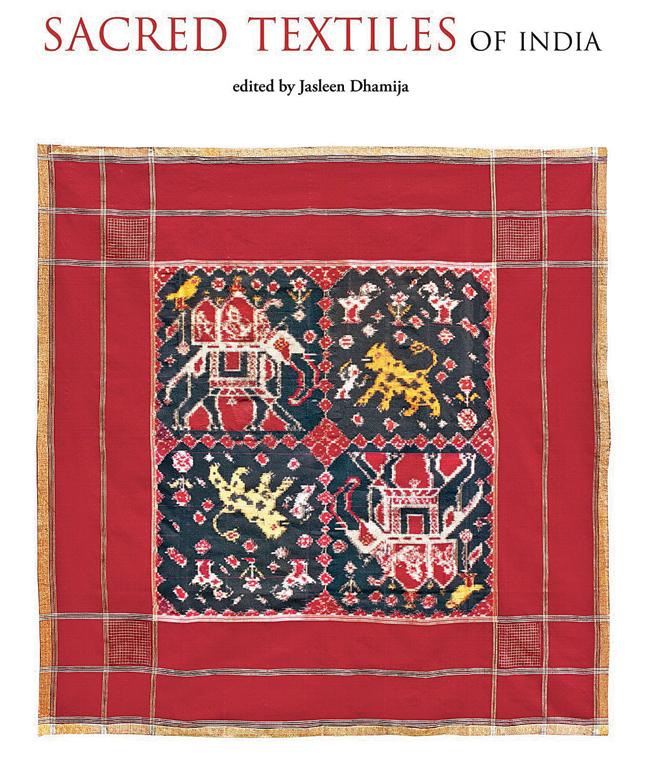 Though it is produced in regions such as Pochampalli (Tamil Nadu), the original master craftsmen are very few today. Sacred Textiles of India will be launched in the city on September 17 at ARTISANS’, Kala Ghoda. 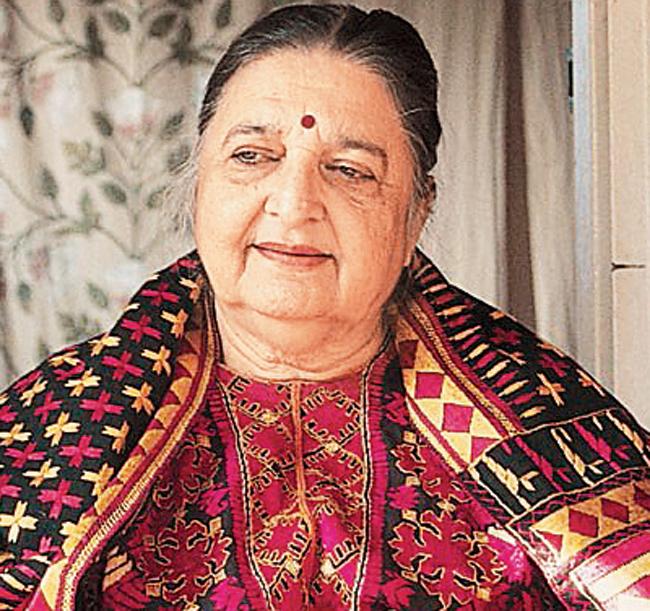 The launch will be followed by a panel discussion with Jalseen Dhamija, Monisha Ahmed, Associate Editor of Marg, and fashion designer Wendell Rodricks.