As Naseeruddin Shah returns to the stage in Einstein, the thespian discusses how theatre makers and his own processes have had to adapt to the new normal 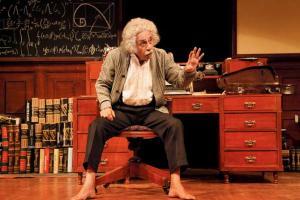 In the play, Shah portrays the genius Albert Einstein who despite being a great thinker and revolutionary scientist, is hampered by failure like everyone else


How does it feel to return to the stage for Einstein after such a long gap?
It's exactly a year since we last performed Einstein (November 29, 2019), and every theatre person has suffered many withdrawal symptoms during this lockdown. But along with the excitement of returning to a beloved performing space there's also some anxiety about whether audiences will venture out. I suppose it will be a while before absolute normalcy returns but through this year I haven't missed shooting half as much as I've missed the stage. In any case, I enjoy the process of theatre so much that I'd do it even if there were no audience.

Did anything change for you because of the lockdown or was it business as usual with your rehearsal process?
Since the lockdown gave us all tons of time, I began initial work on a couple of things which I hope will be staged sooner than later. We actually did several rehearsals online and even performed Act 1 of Waiting for Godot with all of us in our own homes. Nothing compares with the high of being onstage in front of an audience but rehearsing and performing online was not a bad substitute.

Going forward in the new normal, what are the changes you foresee that the theatre industry will need to adapt to and adopt?
I am worried that some theatres may not be able to sustain themselves, in any case they've taken a huge hit financially this year and it's a matter of concern how they, or the performing companies for that matter, will break even reopening only to 50- per cent capacity. It may prove the death knell for the spectacular productions — which may not be a bad thing actually, but even the smaller companies will have to tighten their belts and keep costs down if they want their work to be viable. Recordings of theatre productions will also become more common [much as I hate the idea] and in any case this does seem to be an inevitable part of the future. But when strapped, one's creative juices do begin to flow, so let's hope there is a quantum leap in imaginativeness of theatre work and less emphasis on glitter.

What lessons did the lockdown teach you as an individual as well as a theatre person?
There's probably nothing quite as depressing as waking up in the morning with a whole day stretching in front of you and nothing to do, so I tried to combat that feeling by filling in the empty hours with various creative pursuits. Ideally, one shouldn't complain of boredom ever, if you look around you there is much to do. I learnt how to cook a few basic dishes and quite enjoyed my time in the kitchen. What did change for me was I started helping around the house — which I've never done before! I realised how important it is for me to participate in the activities of the home. I also managed to get in a great deal of reading. Performing online emphasised something I've always believed in — that it is important to concentrate on the act rather than the audience. Since there was no awareness of an audience while performing online I realised that your output need not necessarily depend on the energy the audience feeds you; a way to keep it going has to be found even with no audience present.

Next Story : Set sail into the past