A stage for the complete picture

In its upcoming play, Auroville theatre group Adishakti explores right and wrong through multiple characters from the dramatic Bali vadh episode of the Ramayana 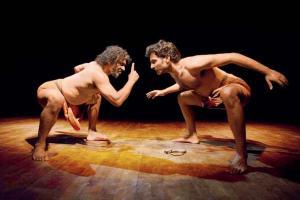 Movement is an important part of Adishakti productions; the actors trained in kushti for the play


That the world doesn't exist in black and white cannot perhaps be better explained in the context of Indian mythology than the Ramayana. For, despite the strong narrative of good versus evil that runs through it, we know of more than 300 versions of the epic, with plot twists and adaptations, that exist across South and Southeast Asia.

Between 2009 and 2011, the Adishakti Laboratory For Theatre Arts Research — which was established by the late Veenapani Chawla as a theatre company in Mumbai in 1981 before she felt her vision to help artistes engage with theatre on a more holistic basis could be better realised in the calmer environs of Auroville, Puducherry — engaged with the Ramayana, inviting performers and thinkers including Sattriya monks from Majauli, Indonesian dancer Sardono Kusomo, Aruna Sairam, Chhannulal Mishra, Romila Thapar and Ashis Nandy, to weigh in on its many versions. The conversations that emerged paved the way for several productions where artistes employed a new approach to the old text, rescuing "an old cultural symbol from being suffocated by purism."

The latest production inspired by the project is Bali. Written and directed by Nimmy Raphel, the play explores the dramatic episode of Bali vadh and the events leading up to it, through the points of view of Bali, Tara, Sugreeva, Angada, Rama and Ravana. "How does one determine the notion of right and wrong? How can it change when every character is given an opportunity to voice his or her thoughts? And can we do it in our own everyday practice? These are questions we grapple with," explains Raphel. One of the questions, for instance, that a key scene in the play asks is if Angada was said to be too young to ascend the throne, was the decision to send him to lead the battle right or wrong?

"Generally, in common folklore, Bali is seen as a negative character. Here, we are trying to show the other sides of the story so we can take a call for ourselves," shares Ashiqa Salvan, who plays Bali's wife Tara, and a jester, who acts as a bridge between the audience and the actors. With minimal text, the language of the performance, she informs, is primarily a physical one. "While several Adishakti productions use the language of kalaripayattu, for this play, we trained in kushti because that's how Bali and Sugreeva engaged in combat."

Salvan shares that before she joined Adishakti she was based in Bengaluru, practising theatre the way it is typically done in metropolitan cities. "I was doing one play after another, but I felt stagnated as an artiste. At Adishakti, however, artistes reside in its premises in Auroville, living and creating work as a family. I went there for a fixed period, but stayed on," she says. Ahead of Bali's shows in Mumbai, this creative process will be shared at an intimate session, where Raphel will also highlight the many facets of physical theatre through a solo performance.

Returning to Adishakti's philosophy of looking at classic text through a contemporary lens, what is it that the play wants its audience to see in a new light? "We tend to look at things in black and white," Salvan explains, referring to how taking a step back to detach ourselves from rigid beliefs could make way for empathy and understanding.