The mystics are here

A festival in its 10th edition celebrates music, poetry and film in events across the city 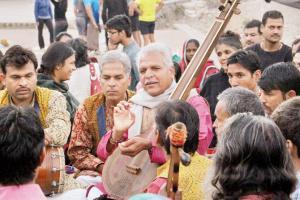 
When lawyer Falguni Desai returned from a trip to Gujarat, in the aftermath of the 2002 riots, she was deeply disturbed. While justice, she believes, takes its course, there is no healing. That, she found in the voice and songs of folk singer Prahlad Singh Tipaniya. This was the genesis of The Kabir Festival, which enters its 10th edition this year.

Spread over 10 days at venues across the city, the festival brings the mystic to the mainstream through music, poetry, workshops, films and discussion. "From Fort to Borivali, there's something for everyone," says Desai about the volunteer-led, community-funded and largely open-air festival. "None of the events are ticketed and having them in public spaces takes away the hesitation of walking in," explains Desai.

As in the past, the festival this year embraces the unconventional with a focus on peace and solidarity. "So, women sing Gurbani, non-Muslims sing qawwali and a road in Jogeshwari East with communal history becomes the site for a festival," says Desai, adding, "The voice of a mystic bypasses structures of religion."

A Cawing Clamour Fills the World - The Sufi vision of Shah Latif
On January 18, 7 pm
At Sangit Mahabharati, JVPD Scheme.

Share
mahalaxmi jogeshwari things to do in mumbai mumbai guide

Next Story : Talk for kaarigars