Junior clerk, his son raped 2 teens at a government shelter home for girls in Shirur from November 2013 to June 2014; girls mustered the courage to speak out after being shifted to another home 
The government’s abominable neglect of its own children’s shelter home for girls in Shirur, some 200 km from Mumbai, has resulted in the repeated rape of two orphans, aged 14 and 15, over nearly eight months by a junior clerk and his son.

State officials left the post of the home’s superintendent vacant for eight years, deeming that an official from another shelter more than 60 km away could fulfill the job as additional responsibility. 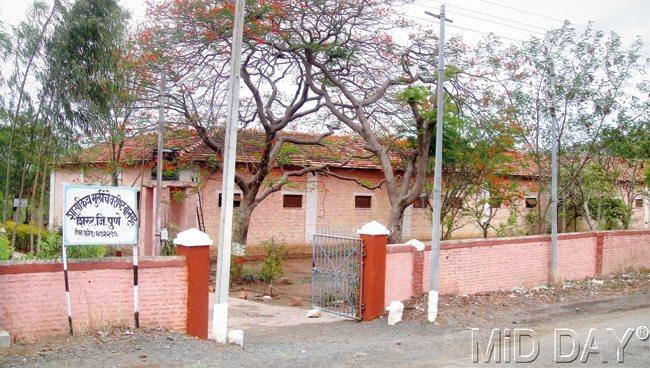 No shelter from monsters: The home for girls in Shirur in Pune district has not had a superintendent for eight years. Pics/Satish Dhumal

The unreasonable stretch of duty resulted in this most abject of crimes, perpetrated countless times since November 2013 to June 2014. No female official had been appointed to the home. Moreover, counsellor Anita Nikam, who was supposed to meet with every girl at the home at least once a month, was not present during the period when the alleged rapes occurred on the shelter’s premises. Shirur police on Sunday arrested junior clerk Shabbir A Bale (52) and his son Bablu Bale (20) on the charges of raping the minors, who were admitted to the home in 2008.

The father-son duo was produced before a special court in Pune and has been remanded in police custody till July 25. Shabbir, his wife and son Bablu used to stay in a bungalow on the shelter premises. Shabbir had, in fact, been recently promoted to senior clerk in Pune.

District Child Welfare Officer Minakshi Birajdar has lodged a complaint against the suspects at Shirur police station, and they have been charged under section 376(c) (intercourse by superintendent of jail, remand home, etc) of the Indian Penal Code, and sections 4, 6, 8 and 12 of the Protection of Children from Sexual Offences (POCSO) Act.

At the time of the alleged crime, 35 girls stayed in the shelter, of whom 10 were orphans. When the other girls would visit their parents during vacations, the orphaned girls would be sent to the Anath Hindu Mahila Aashram in Narayan Peth, St Crispin’s Home in Erandwane and Pandita Ramabai Mukti Mission in Kedgaon by Veena Bhalerao, who then held additional charge as superintendent of the Shirur shelter home. Her primary responsibilities demanded that she oversee a boys’ shelter 60 km away from Shirur.

After the two survivors returned from the Anath Ashram on June 3, they were transferred to the Ramabai Mission centre on June 10, where they confided in the superintendent about the rapes. The superintendent immediately wrote to the Child Welfare Committee (CWC), after which an FIR was lodged by the District & Child Welfare Officer Minakshi Birajdar. The girls stated to the CWC that the suspects initially called them to their residence on the pretext of some work and molested them.

They said the duo had threatened them with dire consequences if they spoke of the sexual assaults to anyone. “No one can do me any harm if you complain, but I will beat you up in your dreams too,” Shabbir Bale reportedly intimidated the girls.

The committee enquired of the other girls on July 18 about any misconduct by the suspects since March 2008. So far, no other girl has come forward with a complaint, but officials believe that a few of them might eventually muster the courage to record their statements against the suspects.

Police Inspector Bhagwan Nimbalkar, in charge of Shirur police station, said, “The FIR was registered on Friday night and the suspects were arrested on Sunday. Their police custody was sought to thoroughly investigate the matter. Medical tests of the suspects and the victims are to be conducted.”

Rohini Jawale-Chavan, who now holds the additional charge as superintendent of the Shirur home, said “When I took charge of the Shirur centre, I had personally asked every girl about their problems, but no one told me of the rapes. It was later found that the suspects had beaten up all the girls and no one had the courage to complain against them. When the girls were transferred to another shelter home, they experienced a free environment and gathered the courage to expose the wrongdoings at the Shirur home.”

“When the alleged rape incidents happened, counsellor Anita Nikam was not present. If the girls had been counselled regularly, they might have spoken out against the misconduct of Shabbir much earlier,” she added.

Next Story : Woman in Thane booked for husband's suicide