Victim's lungs punctured after auto driver and co-passengers assaulted him 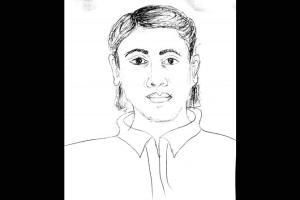 A sketch released by the police


The Thane police crime branch, along with city police have launched a rigorous investigation into the case of a 25-year-old Manipur man, who was brutally attacked by a share-auto driver and three co-passengers. He was stabbed and thrown out of the running vehicle on Ghodbunder Road last Sunday.

According to sources, the police have prepared a sketch with the help of the victim's statement and distributed it among officers who are working on the case. An officer said, "The auto driver and the other accused not only stabbed him but also robbed him of his mobile phone and other valuables."

The victim, identified as Pangmayung Raikhan, hailed the auto from Pritam's Global Cuisine in Thane where he works as a food and beverage supervisor. "His [Raikhan's] workplace is barely a 15-minute drive from his house in Ghodbunder Road, where he lives with his sister. On Sunday night, he left his workplace at 12.30 am and boarded the share auto, which had three passengers," an officer said.

A few minutes later, the driver stopped the auto to relieve himself. All the other passengers stepped out except Raikhan. On returning, they began assaulting Raikhan, who screamed for help. Being a deserted, poorly-lit road, nobody came to his rescue. After stabbing him in the back, they threw him by the side of the road.

Rescued by locals, Raikhan was admitted at the Vedant Hospital, where doctors found that his lung had been punctured due to stabbing. After six days of treatment, Raikhan is reportedly out of danger. Doctors have advised another 15 days of rest for the wounds to heal. Additional Commissioner Anil Kumbhare of Thane police said, "We are investigating all possible angles. The hunt for the men is on." The police have asked anyone with any information to come forward.