Theft accused hurls slippers at magistrate in court in Thane

During the hearing of the case in a court, magistrate J S Pathan pronounced Ansari guilty. The accused, in a fit of anger, then threw his slippers at the magistrate, but the latter managed to avoid getting hit 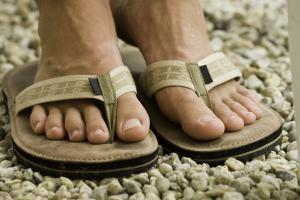 
An undertrial allegedly hurled a pair of slippers at a magistrate in a court in Thane district of Maharashtra after being convicted in a theft case, a police official said on Wednesday. However, the magistrate ducked in time and escaped getting hit by the slippers, he said. Ashraf Ansari, 22, was arrested sometime back in a case of theft and house-trespass in Bhiwandi town here, an
official at Shanti Nagar police station said.

On Tuesday, during the hearing of the case in a court in Bhiwandi, magistrate J S Pathan pronounced Ansari guilty. The accused, in a fit of anger, then threw his slippers at the magistrate, but the latter managed to avoid getting hit, the official said. The policemen immediately overpowered Ansari and
escorted him out of the court, he said. The accused was later arrested and booked under Indian  Penal Code Sections 353 (assault or criminal force to deter public servant from discharge of his duty) and 228 (intentional insult or interruption to public servant sitting in a judicial proceeding), he added.

Next Story : Accused absconding for murder case since 2004 arrested in Pune