Opener Rory top-scores for England with 90 while skipper Joe Root stays unbeaten on 68 as hosts declare at 226-2 on Day 3 of third Test at Old Trafford; Windies need 399 to win match and series 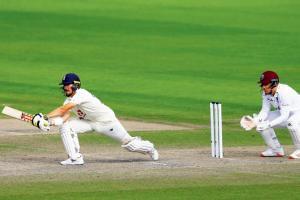 England's Rory Burns reverse sweeps during a fine innings of 90 on Day Three of the third Test against the West Indies at Old Trafford, Manchester, yesterday. Pic/AFP


Rory Burns (90) and Dom Sibley (56) shared an impressive opening stand before Joe Root 68 not out batted well too as England declared their second innings on 226-2, to set the West Indies a target of 399 to win the third Test at Old Trafford on Sunday. Sibley was out lbw to WI skipper Jason Holder on 56.

Windies one wicket down
At the time of going to press, West Indies were 4-1 after just two overs, with opener John Campbell out, caught by Root off pacer Stuart Broad. Fellow opener Kraigg Brathwaite was not out on one while nightwatchman Kemar Roach was unbeaten on three.

Earlier, England had dismissed the Windies for 197, with Broad taking 6-31. The hosts were bowled out for 369 in their first innings. Broad was brilliant. His six-wicket haul saw him move onto 497 Test wickets as he continued his brilliant form in the match, having already smashed a game-turning 45-ball 62 at the end of England's first innings.

Resuming on 137-6, Windies's Jason Holder and Shane Dowrich reached their first target—getting the visitors past the follow-on mark—as England started Day 3 with the same pacemen, who finished Saturday, Jofra Archer and Chris Woakes. However, it all changed when veterans Broad and James Anderson came into the attack. Off his third delivery of the day, Broad trapped Holder lbw for 46.

Broad on song
Then, off his third over, Broad removed Rahkeem Cornwall (10) and Kemar Roach (0) in the space of four balls. Broad then took the sixth wicket when Dowrich (37) slashed at a short ball and Woakes snaffled the catch after getting round from mid-on.

Broad was dropped for the first Test—won by the West Indies in Southampton—and didn't take it well, expressing his disappointment in a TV interview during the match. Restored for the second test in Manchester, Broad took three wickets in each innings in a win for England. In the third Test, he has made his best score with the bat since 2013 and taken his 18th five-wicket haul in Tests.

The West Indies were
further hampered when wicketkeeper Dowrich had to leave the field after taking a ball from Shannon Gabriel on the mouth.

Next Story : 'James Anderson and Stuart Broad have shown their qualities'