At the time of going to press, Babar Azam was batting on 25 and Mohd Rizwan not out on four when rain stopped play 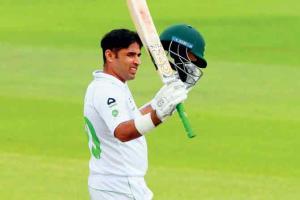 Pakistan's Abid Ali celebrates his half century on Day One of the second Test v England. Pic/AFP


Opener Abid Ali provided the only reason for Pakistan to cheer as his half century helped the visitors post 126 for five on a rain-hit first day of the second Test against England at the Rose Bowl here on Thursday. Abid smashed a 111-ball 60 and along with Azhar Ali (20) helped Pakistan to recover from an early blow suffered due to Shan Masood’s dismissal in the second over after opting to bat.

At the time of going to press, Babar Azam was batting on 25 and Mohd Rizwan not out on four when rain stopped play. James Anderson returned to form with a double strike as the England great moved closer to becoming the first paceman to take 600 Test wickets. Anderson had figures of 2-35 in 15 overs.

Abid made the most of the two dropped catches in the slips. In humid conditions conducive to Anderson’s bowling, he needed just eight balls to have Masood lbw for one with an inswinger.

Pakistan should have been 7-2 but Abid, on one, got a reprieve when Dom Sibley dropped him at third slip off Stuart Broad. Azhar was then on seven when he defended a Chris Woakes delivery and the ball trickled onto his stumps but failed to dislodge the bails. Woakes suffered again when Abid, while on 21, got an outside edge only to be dropped by Rory Burns at second slip.

Next Story : Mithali Raj is all decked up in purple for her afternoon webinar