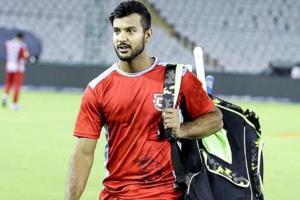 
India and Kings XI Punjab batsman Mayank Agarwal on Tuesday took to social media, saying he cannot wait to hit the ground running as the Indian Premier League (IPL) season 13 is set to start in the UAE from September 19.

"Can't wait to hit the ground running. Bring it on!" India's Test opener Agarwal wrote on Twitter with a picture of him donning the Kings XI Punjab jersey.

Former Indian pacer Ashish Nehra has said Agarwal has shown a lot of promise in the initial days of his international career and will only get better and score a lot of runs in the days to come.

Agarwal has so far played 11 Tests for India in which he has scored 974 runs, including three hundreds and four half-centuries.

"He (Agarwal) has done really well in domestic games and India-A and that's how he got his chance. He is not somebody who has been playing domestic cricket for one or two years and suddenly he comes to the scene. He has scored a lot of runs and I am sure with time he will get better and better," Nehra said while speaking on Star Sports' Cricket Connected show.

The 29-year-old however wasn't able to perform to his potential on the New Zealand tour. In the two-Test series which India lost 0-2, he could manage scores of 34, 58, 7 and 3.

Meanwhile, India's Test top-order batsman Cheteshwar Pujara, in a separate tweet, shared glimpses of his net session. "New day. Same intensity!" Pujara tweeted. India are slated to travel Down Under for a full series against Australia later in the year.

The Board of Control for Cricket in India (BCCI) in its all-important Governing Council meeting of the Indian Premier League (IPL) last Sunday decided to hold the 13th edition of the league from September 19 to November 10. This will include 10 double headers. And the evening matches will start at 7:30 p.m. IST.