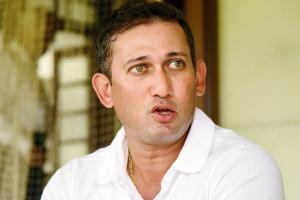 The CIC headed by former Mumbai captain and India pacer Raju Kulkarni decided to back Ajit Agarkar & Co after an intense discussion that went on for more than three hours.

Yesterday's meeting was held because a Special General Meeting which was attended by 79 clubs on February 21, wanted the four selectors (Nilesh Kulkarni, Sunil More and Ravi Thakkar are other members) replaced because according to them, the selectors did not watch local matches resulting in top performers on the local circuit missing out on being part of the Mumbai probables at the start of the season. The selectors, though, rejected this claim.

"The CIC felt these cricketers are of great repute and their credentials cannot be doubted. That is why we have unanimously decided not to remove them," Kulkarni told mid-day.

"We feel this issue (of not watching local matches) could have been solved amicably through a discussion," he added. However, the SGM decision is binding. With the CIC deciding otherwise, the onus is now on MCA's ad-hoc committee appointed by the Bombay High Court, to act on the SGM's decision.

MCA's joint secretary Dr Unmesh Khanvilkar said the issue will be discussed in an ad-hoc committee meeting. The CIC also handed full powers to the selectors to pick teams for Syed Mushtaq Ali T20 knockouts and the U-23 one-dayers.