'You can't compare anyone in Indian team with Ben Stokes' 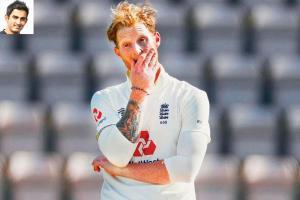 
Ben Stokes has become the talk of the town ever since England's epic win against West Indies in the second Test match of their series. England thrashed West Indies by 113 runs on the back of Stokes' all-round performance of 254 runs and three wickets, including the key wicket of Jermaine Blackwood in the second Test. The left-handed batsman had played a knock of 176 in the first innings, while in the second, he scored a quickfire 78 not out from just 57 balls.

Many cricketers took to social media to shower praises on Ben Stokes following his brilliant show. Batting legend Sachin Tendulkar hailed Ben Stokes for his remarkable performance as well. Great comeback by England to win this Test. This is turning out to be a brilliant Test Series! England have been superb & the way @benstokes38 has played is just remarkable. It will be a great finale to this Series! Looking Eyes forward to the 3rd Test already!, wrote Tendulkar on Twitter.

VVS Laxman took to Twitter to write, "Excellent comeback by England to win the second test after the loss in the first Test, especially considering a complete day's play was lost to rain. Ben Stokes was a class apart and just keeps on increasing his reputation as a player the world sits and watches."

Speaking exclusively on Star Sports show Cricket Connected, former India opener Gautam Gambhir heaps praise on England all-rounder Ben Stokes, “You can’t compare anyone in India at the moment with Ben Stokes. Absolutely not, because Ben Stokes is in his own league. What he has done in Test cricket, what he has done in one-day cricket, what he has done in T20 cricket, I don’t think so there’s anyone, let alone in India, there isn’t anyone who’s even close to him in world cricket at the moment. And that is the kind of impact player you need in every line-up. It would be a dream for every captain to have someone like Ben Stokes – whether he’s batting, whether he’s bowling, whether he’s fielding – and he’s a leader in his own capacity. You don’t have to be a leader to be a leader, you don’t need to be called a captain to be a captain. You can be a leader by your own performances as well. So, I think there are a lot of guys would be actually looking to be like Ben Stokes, but unfortunately, there’s no one at the moment in world cricket.”