Kohli and Rahane's efforts in vain, as hosts take 3-1 lead 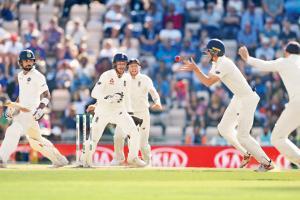 
India's ambition of becoming the best travelling team in the world came crashing down after slumping to a 60-run loss to England in the fourth Test match in Southampton here yesterday. The loss meant England retain the Pataudi Trophy with a 3-1 lead with one to be played at the Oval.

India in the meantime, will rue the fact that they started the series so miserably and despite pulling one back in the third Test, they were soundly beaten in the fourth match. The day had started positively for the visitors with India wrapping up the last two England wickets in the first 15 minutes of play. England were all out for 271 in the second innings which meant India had to chase 245 on a wearing pitch to keep their hopes alive in the series.

However, James Anderson and Stuart Broad produced masterful opening spells to slice through the Indian top order. KL Rahul was cleaned bowled by Broad for a duck, Cheteshwar Pujara, centurion in the first innings, had no answer to an Anderson ball that zipped back off the surface to be trapped in front for five. Shikhar Dhawan hit a couple of crisp shots but he was squared up by an Anderson delivery before Stokes took a fine catch at gully as India slid to 22 for 3.

India's hopes were raised by a stunning 101-run partnership from Virat Kohli and Ajinkya Rahane. Both played Moeen Ali beautifully, using their reach to smother the spin and then jumping on the back foot to score either side of the wicket. In between, the short ball was punished as England started to feel the heat.

The pair had pushed the score beyond a hundred and Kohli reached his half-century with a majestic flick through square leg. But just at the stroke of tea, Moeen finally had his man with Kohli gloving a sharp bouncing off-break to short leg for a well-made 58.

As has been the case throughout the series, the loss of Kohli led to monumental collapse as India went from 123-3 to be all out for 184. Moeen once again tormented the Indian order with his off-breaks to finish with 4-71 for the innings and 9-134 in the match.

Next Story : Ind vs Eng: Will come out with the same intensity in final Test, says Kohli