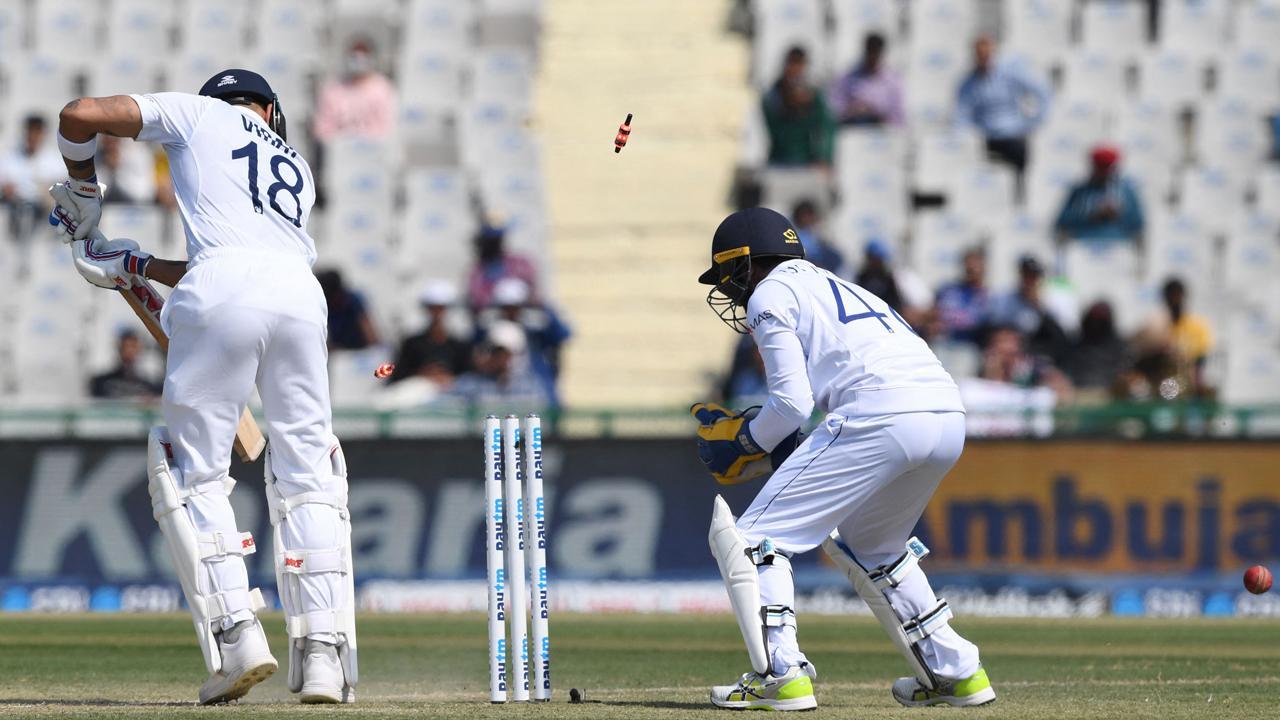 
Virat Kohli left his legion of fans disappointed after failing to make a good start count in his 100th Test but India steadily moved to 199 for four at tea on the opening day of the first Test against Sri Lanka here on Friday.

At exactly 11 am, the 5000 odd people roared in unison as 'King Kohli' emerged from the dressing room after opener Mayank Agarwal's dismissal.

A picture-perfect straight drive off left-arm seamer Vishwa Fernando (11-1-50-1) was soothing for the eyes as he reached 8000 Test runs during the course of his 45 off 76 balls that also had four more hits to the fence.

A square cut that beat deep point manned to save boundary was delightful but left-arm spinner Lasith Embuldeniya (20-1-62-2) got one that pitched one length and turned away to clip the bails of Kohli's off-stump, leading to a stunned silence.

Hanuma Vihari (58 off 128 balls) made good use of his chance in place of Cheteshwar Pujara and looked in control during his 90-run stand with Kohli before he inside edged Fernando's delivery onto the stumps.

It was a perfect setting to score a second Test hundred but Vihari fluffed his lines.

At tea, Shreyas Iyer (14 batting) and Rishabh Pant (12 batting) were at the crease.

Earlier, skipper Rohit Sharma played one pull shot too many while Mayank Agarwal was deceived by an arm ball as India lost both their opener after a quick start with 100 plus runs coming in the first session.

Rohit (29 off 28 balls) and Agarwal (33 off 49 balls) built a half-century stand inside 10 overs but then couldn't capitalise on the start.

However, India maintained a scoring rate of more than three and half runs per over during the two sessions, largely due to the 22 boundaries and a six hit.

However, Lahiru Kumara again dug one short, which was pulled but found the fielder at deep fine leg, having already hit six boundaries.

Agarwal, at the other end, did get a few boundaries but they were streaky ones before Embuldeniya trapped him on the front-leg.

Embuldeniya, who has risen up the ranks, got the ball to turn and keep low in the first session itself which will certainly be a pleasing sight for Ravichandran Ashwin and Ravindra Jadeja.