With this win, Delhi Capitals is currently at fifth position in the table with 12 points. Rajasthan Royals is at third position with 14 points 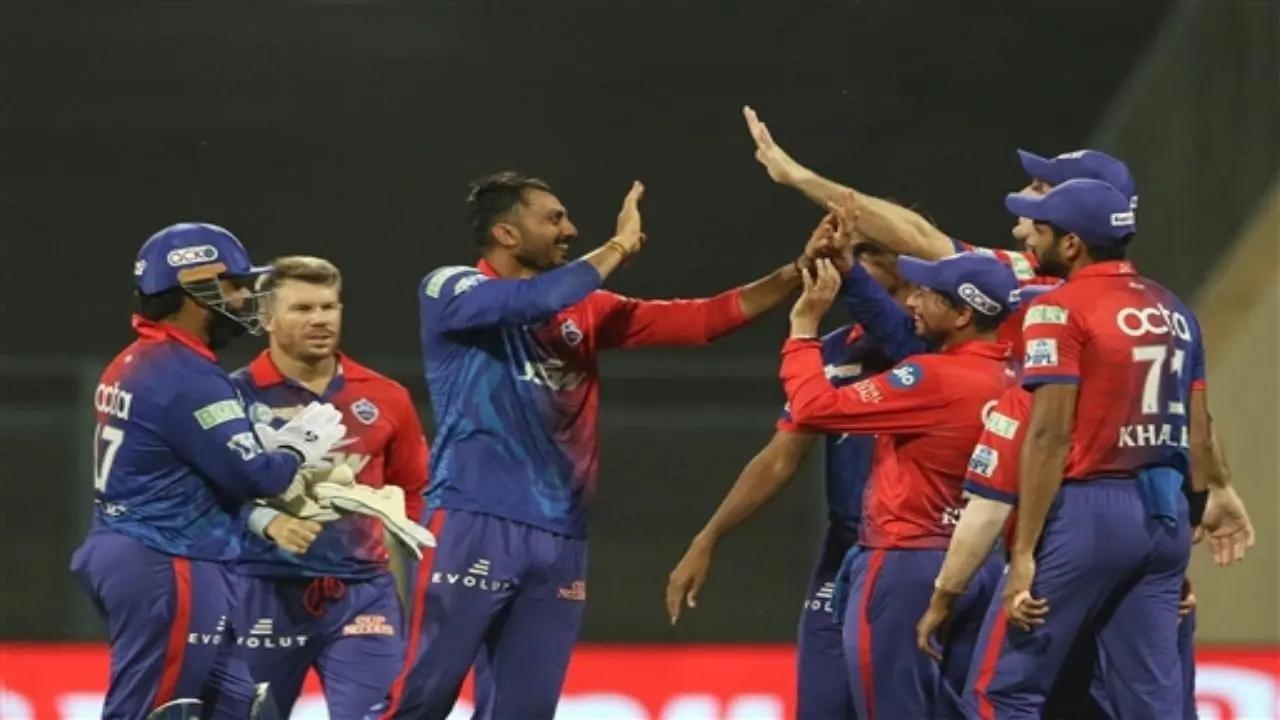 
A 144-run stand between Mitchell Marsh (89) and David Warner (52*) helped Delhi Capitals (DC) register an eight-wicket win against Rajasthan Royals (RR) at DY Patil Stadium in Navi Mumbai on Wednesday. It was a memorable day for DC, who put on an all-round performance to keep their playoff hopes alive. With this win, DC is currently at fifth position in the table with 12 points. RR is at third position with 14 points.

While chasing a target of 160 runs, Delhi Capitals started off with a poor start, losing the opener Srikar Bharat for a duck on the second ball of the innings after a Trent Boult delivery found the edge of his bat and landed in the hands of wicketkeeper Sanju Samson. This brought Aussie all-rounder Mitchell Marsh to the field alongside his compatriot David Warner. Prasidh Krishna delivered a maiden second over and the next Boult over gave away only 4, leaving Delhi struggling at 5/1 in three overs.

Things started to pick up after the introduction of spin with Ravichandran Ashwin in the fourth over, who gave away 12 runs, with a six from Marsh. The hit infused some life into the chase as the fourth, fifth and sixth over went for 11,12 and 10 runs respectively with Marsh and Warner stabilising the innings. Marsh took a more aggressive approach, while Warner anchored from the end. At the end of the powerplay, DC stood at a sub-par 38/1, with Marsh (24*) and Warner (11*).

After the powerplay, Marsh kicked the chase into the next gear, smashing pacer Kuldeep Sen for two sixes and a total of 16 in his seventh over. This also brought up the fifty-run stand between Warner and Marsh, with the latter being a more dominant batter. Both the batters continued to pile up runs further. By the time ten overs ended, DC had recovered and it stood at a solid 74/1, with Marsh (47*) and Warner (23*). Soon, Marsh also hit his half-century, his first of the season in 38 balls with a six off Chahal's delivery in the 11th over.

The onslaught on the RR bowling attack did not stop in the second half of the innings either, with the duo going all out against Yuzvendra Chahal, Ashwin and Prasidh Krishna. A four by Warner off Sen's third delivery in the 14th over brought the 100-run stand between him and Marsh in just 79 balls. By the end of 15 overs, DC was at the commanding position in the match with 114/1 and Marsh (70*) and Warner (38*) stood at the crease with the equation down to 47 runs needed in the final five overs. Marsh and Warner continued to make light work of the RR bowling attack, with the duo smashing 15 runs in the 16th over bowled by Ashwin.

In the 18th over of the game, Chahal finally got the wicket of Marsh, who went back for 89 off 67 balls after being caught by Sen at the short fine-leg. This brought captain Rishabh Pant to the crease, who smashed two sixes in Chahal's 18th over to take Delhi three runs closer to a win. Warner finally completed the formalities with a three of the first ball of the 19th over. It also brought his fifth half-century of the season. Earlier, top knocks by Ravichandran Ashwin and Devdutt Padikkal provided Rajasthan Royals with a total of 160/6, at the end of the first innings against Delhi Capitals, here at Dr DY Patil Stadium on Wednesday. Ashwin smashed 50 runs off 38 balls, while Padikkal scored 48 runs off 30 balls, and gave Rajasthan a strong hand in the first innings. For DC, Chetan Sakariya, Anrich Nortje and Mitchell Marsh bagged two wickets each. Put to bat, Rajasthan had a rough start as their opening batter Jos Buttler fell prey to Chetan Sakariya after only scoring 7 runs.

Ravichandran Ashwin was promoted to number three to join hands with opener Yashasvi Jaiswal to keep the scoreboard moving. The duo stitched a great partnership and took their team's total beyond the 50-run mark in the 8th over of the innings. In the 9th over Mitchell Marsh gave a big blow to RR as he dismissed Jaiswal for 19 runs. Jaiswal's wicket invited Devdutt Padikkal to the crease and the latter smashed Mitchell Marsh for 8 runs. Ashwin brought up his maiden half-century in just 37 balls, while Padikkal gave a strong stand to him from the other end. They took Rajasthan's score to 107/2 in 14 overs.

Mitchell Marsh was brought back into the attack and the pacer gave his team a big breakthrough as dismissed the well-set batter Ashwin for 50 runs. RR skipper Sanju Samson then joined Padikkal on the crease to set up a big score and keep their team's scoreboard moving. Padikkal smashed the DC bowlers all around the ground. RR skipper could not stand longer on the ground and fell prey to Anrich Nortje after only scoring six runs. Young batter Riyan Parag came to the crease to steady his team's batting lineup. The duo of Parag and Padikkal smashed Nortje for 14 runs in a one over. In the 17th over of the innings, Chetan Sakariya was brought back into the bowling attack and he delivered an amazing spell of 7 runs with the wicket of Riyan Parag.

Rassie van der Dussen then joined Padikkal on the crease to remove some pressure from the team. In the 19th over well-set batter, Padikkal fell prey to Nortje after scoring 48 runs, leaving the team's total at 146/6.