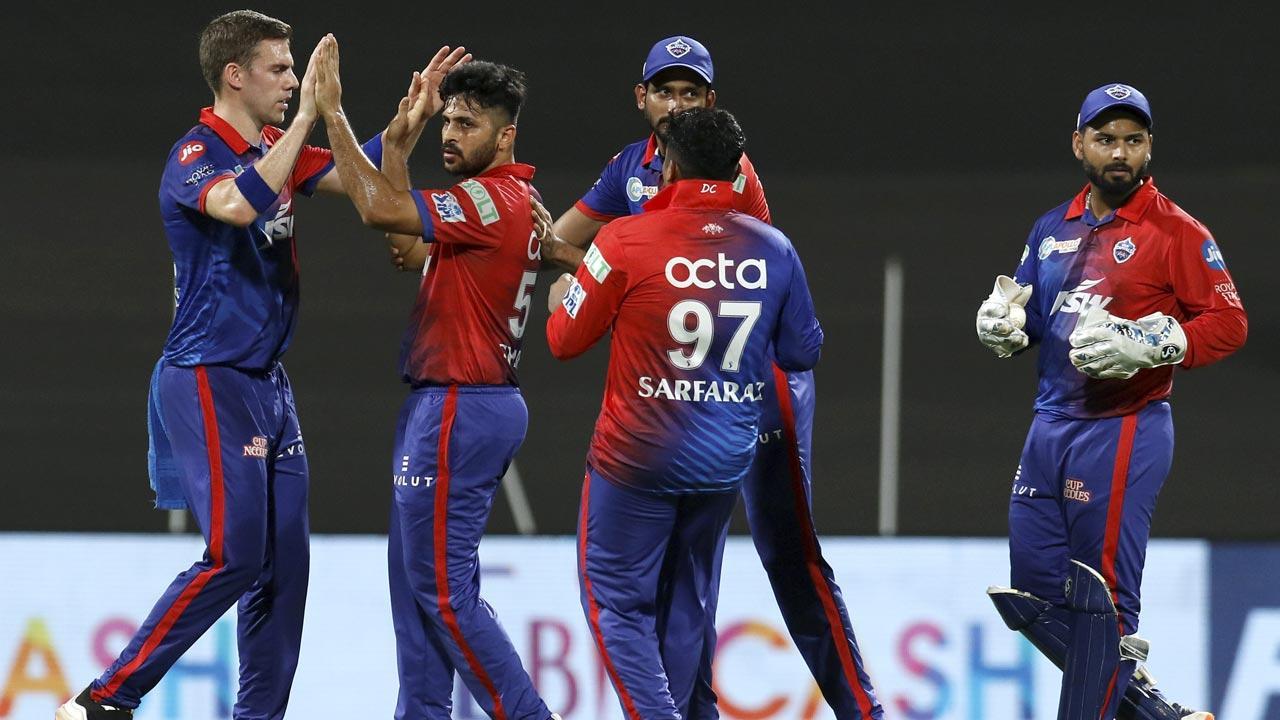 Shardul Thakur of Delhi Capitals celebrates with teammates, the wicket of Shikhar Dhawan of Punjab Kings during the 64th T20 cricket match of the Indian Premier League 2022 (IPL season 15), between the Punjab Kings and the Delhi Capitals, at DY Patil Stadium in Mumbai. Pic/PTI


Axar Patel and Kuldeep Yadav shared four wickets between themselves while Shardul Thakur picked his career-best IPL figures of 4/36 as Delhi Capitals defeated Punjab Kings by 17 runs at the D.Y Patil Stadium on Monday.

After Mitchell Marsh's 49-ball 63 carried them to 159/7, Axar, Kuldeep and Thakur triggered a collapse which saw Punjab lose six wickets before reaching the halfway mark of the chase. Though Jitesh Sharma tried his best with a 34-ball 44, Punjab could make only 142/9 in their 20 overs.

The win also marks Delhi winning two matches in a row for the first time in the tournament and doing the double on Punjab. With 14 points in their tally, Delhi have also managed to displace Royal Challengers Bangalore from fourth place on the points table on net run rate.

In their defence of 159, Khaleel Ahmed and Anrich Nortje were hit for five fours and a six in the first four overs, with Jonny Bairstow hitting five of those boundaries. Nortje came back in his second over to bounce out Bairstow and the top-edge on hook was caught by deep square leg.

Pace brought more rewards for Delhi as Thakur removed Bhanuka Rajapaksa and then struck the crucial blow by dismissing Shikhar Dhawan on the last ball of the powerplay. While Rajapaksa's cross-bat swipe went to backward point, Dhawan was cramped for room, giving a healthy edge behind to Pant.

Post-powerplay, Axar grabbed his 100th IPL wicket with a length ball around off-stump skidding in to castle Mayank Agarwal through the gate. Punjab's trouble increased when Liam Livingstone danced down the pitch to dispatch Kuldeep over long-on. But he completely missed the googly from the left-arm wrist-spinner and was easily stumped by Pant.

Kuldeep found more success with the wrong-un when he beat Harpreet Brar's inside edge on defence to bowl him through the gate. Axar's arm ball fetched him another scalp when Rishi Dhawan missed his sweep and the ball straightened after pitching to hit the top of the off-stump.

Jitesh, who survived a run-out chance, waged a lone battle with the bat, swatting Nortje, Ahmed and Thakur for boundaries. Giving him good support was Rahul Chahar, who smacked Ahmed for a four past mid-off and muscled a pull over deep mid-wicket for six.

With 39 needed off 18 balls, Rovman Powell produced a moment of brilliance in the 18th over by leaping to his left and throwing the ball back to the field before losing his momentum backward, saving five runs.

Four balls later, Thakur broke the 41-run stand as Sharma couldn't get the needed elevation on knuckleball outside the off-stump and was caught by Warner running in from long-off.

Though Kagiso Rabada muscled him for a pulled six over deep mid-wicket, Thakur had the last laugh as the South African holed out to long-off. Despite two dropped catches in the last two overs, Delhi were able to close out a victory.

Next Story : ‘Chilled and nice’