Justice (Retd.) Mukul Mudgal on Monday said the much-awaited report of Justice R.M. Lodha-led panel will have a greater impact on the Board of Control for Cricket in India (BCCI) 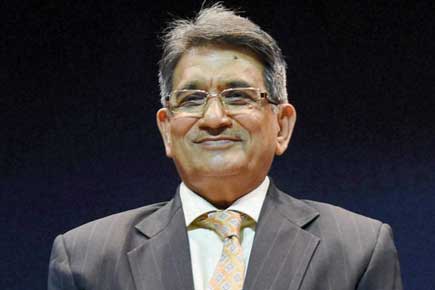 The Supreme Court-appointed Lodha Committee today recommended sweeping reforms and an administrative shake-up for the troubled BCCI by suggesting that ministers be barred from occupying positions, a cap put on the age and tenure of the office-bearers and legalisation of betting. 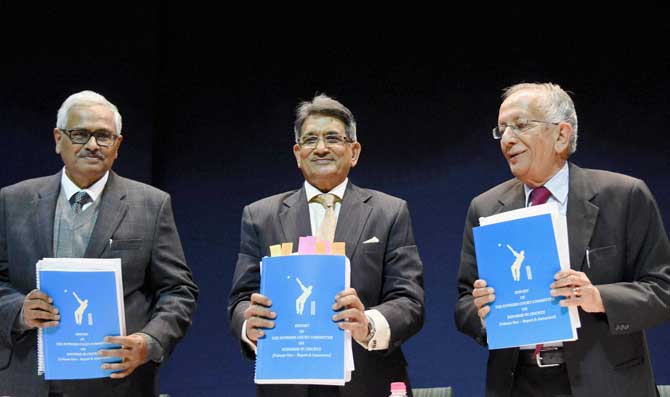 Chairman of the Supreme Court Committee on Reforms in Cricket Justice (retd.) R M Lodha with members Justice Ashok Bhan (R) and Justice R V Raveendran showing the copy of their report at a press conference in New Delhi on Monday. Pic/PTI

In a series of drastic recommendations, the three-member panel, headed by Justice (Retd) R M Lodha, also suggested one unit should represent only one state, while taking away the voting rights of institutional and city-based units.

The committee also suggested the restructuring of the BCCI's administrative set-up, proposing the position of a CEO to run the daily affairs of the Board accountable to a nine-member apex council.

Addressing a crowded press conference after submitting a 159-page report to the Supreme Court, which will decide whether these recommendations would be binding on the BCCI, Lodha said he held 38 meetings with Board officials, cricketers and other stakeholders.

"First thing is about the structure and the constitution. As you know, presently the BCCI has 34 members. Some of these members do not have any territory like Services, Railways etc.

Some of them do not play tournaments. Some of the states have multiple members like Maharashtra has three, Gujarat has 3.

With the interactions we had, except few it was broadly represented to us that one state as a unit of representation in BCCI is a very fair idea," Lodha said as he gave detailed explanations for the recommendations.

Among the most sensational suggestions by the Lodha panel, which also included Justice (Retd) Ashok Bhan and Justice (Retd) RV Raveendran, was the one to legalize betting.

The panel felt that the move would help curb corruption in the game and recommended that except for players and officials, people should be allowed to place bets on registered websites.

Among other steps, panel said that to ensure transparency in the BCCI's functioning, it is important to bring the body under the purview of the Right to Information Act, something that the Board has vehemently opposed in the past citing its autonomy.

"...since the BCCI performs public functions, people have the right to know the functions and facilities and other activities of the BCCI and therefore in our opinion whether RTI Act is applicable to BCCI or BCCI is amenable to RTI is sub-judice. We have recommended the legislature must seriously consider bringing BCCI within the purview of the RTI Act," Justice Lodha stated.

Another important decision taken by the committee was to clear former IPL COO Sundar Raman, who was alleged to have contacts with bookies. The panel said there was not enough evidence to indict Raman.

Putting a cap on the age and tenure of the BCCI office-bearers, the committee said that the Board members should not hold office for more than three terms.

Justice Lodha said the President can have only two terms of three years each but other office bearers can have three terms. There will be a compulsory cooling off period after each term for all office-bearers.

"As regards the office bearers of BCCI - President, VP, secretary, joint secretary and treasurer, certain eligibility criteria has been fixed like, he must be an Indian, he must not be above age of 70, he must not be insolvent, he must not be a minister or a government servant and who has not held office in the BCCI for a cumulative period for nine years," Lodha said.

"The present system gives as many as three votes to the President of BCCI - the first is as person representing a State Association which is a permanent Member of BCCI, the second as chairman of the meeting under Rule 5(i) and the third is a casting vote in the event of a tie, vide Rule 21.

While his vote as representing a permanent member of BCCI and his vote in the event of a tie are fair and permissible, provision of additional vote as chairman of the meeting requires to be deleted," he added.

As part of its proposed revamp of the Board's administrative set-up, the panel said that the body's everyday affairs should be run by a CEO. The panel said there should also be a players' association to ensure that cricketers have a say in the Board's functioning.

"There should be an apex council for the BCCI comprising 9 members, of which 5 should be elected, 2 should be representatives of players association, and one woman. Day to day management of the BCCI will be conducted by the CEO. He will be assisted by 6 professional managers and the team of CEO and managers will be accountable to the apex council," said Justice Lodha.

Lodha said the players' association will not be a redundant body and will ensure that the current and former cricketers have a voice in the Board.

"Most of the players who have played first-class, both men and women, and who have retired from competitive cricket will be in this association. This association shall be assigned functions and will be constituted and run with the financial support of the BCCI. However, they will not act as a minion. The idea is to give players voice, use their expertise and skills for the development and betterment of the game," Lodha said.

On to the IPL, which has been battling a credibility crisis ever since the 2013 spot-fixing scandal, the Panel recommended a revamp of its Governing Council.

"Regarding the IPL, the recommendation is that the chief governing body will be known as the Governing Council, which will comprise nine members. The Secretary and the Treasurer of the BCCI will be ex-officio members of this IPL governing council," Justice Lodha said.

"Two other members of the IPL Governing Council will be nominated/elected by the full members. Of the remaining five, two will be the nominees of franchises, one will be a representative of the players association (so one needs to be formed), one will be a nominee of the Comptroller and Auditor General of India's office," he added.

"The Governing Council of IPL will be entitled to take all decisions concerning IPL, which includes the decision relating to financial matters. However, Governing Council will be answerable to the General body of the BCCI. So limited autonomy is proposed for the IPL GC," he added.

"They must comply with all the directives of the BCCI in putting in place issues such as resolution of conflict of interest, administering the code of conduct, behaviour, and corruption issues. Any breach of the directives by state associations would dis-entitle them from the grant of the subsidy and other grants from the BCCI," he added.

The committee recommended the institution of the office of an Ethics Officer, who would be responsible for resolving issues related to the conflict of interest. Besides, it also suggested the appointment of an Electoral Officer to conduct the Board elections.

"Ethics officer proposed by us would be a former High Court judge and the third authority which we have proposed to be created is an electoral officer who would oversee the entire election process relating to the office-bearers namely, preparation of voters list, publication, dispute about eligibility of the office-bearers.

"All these matters relating to elections shall be overseen by the Electoral Officer. The Electoral Officer will be nominated at least two weeks before the election and such officer would be a former Election Commissioner," Lodha said.

"As regards, the role of Ethics Officer which centres on conflict of interest. Detailed norms have been laid down to ensure there is no direct or indirect, pecuniary or other conflict or appearance thereof in the discharge of the functions of those persons associated or employed by the BCCI, its Committees, its Members or the IPL Franchisees. These norms shall be administered by an Ethics Officer.

Besides, the panel said that the Board should have an Ombudsman for dealing with internal conflicts, a suggestion that the Board has already accepted by appointing Justice AP Shah to the position in November last year.

"Ombudsman can take cognisance of complaints suo moto, or received complaint or referred complaint by the apex council," Lodha said.