Karan Tiwari, 27, known as junior Dale Steyn in local cricket for his physique and similar bowling action to the South African, was found hanging from his ceiling fan 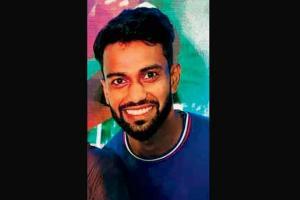 
A Mumbai club cricketer was found dead at his Malad (East) residence on Monday night, with a friend saying he killed himself because he could not break into any of the eight IPL teams.

Karan Tiwari, 27, known as 'junior Dale Steyn' in local cricket for his physique and similar bowling action to the South African, was found hanging from his ceiling fan after his family forced open his bedroom door. The incident took place at 10:30pm at Konu Compound, Gokuldham.

An Accidental Death Report (ADR) has been registered by the police. "We have registered an ADR and investigations are on," Babasaheb Salunkhe, senior Police Inspector at Kurar police station, told mid-day. According to Kurar police sources, Karan was depressed after not getting picked in the IPL, which begins on September 19 in the UAE. "Karan called his best friend in Udaipur to inform him that he is going to commit suicide. He was depressed after not getting a chance to play in the IPL. His friend informed Karan's sister who lives in the same city. His sister called his mother, but by then, it was too late. Karan was declared dead before reaching the hospital," the source said. As per BCCI rules, only those players who have represented a state team in any age category are eligible to enter the IPL auction. Karan often bowled to IPL teams at Wankhede last season. One of Karan's close friends said: "He was hoping to get selected for a state team. He was in talks with a few of them. He was a very promising cricketer and had uploaded his bowling and batting videos on his last WhatApp status. It is shocking that he chose to take such a drastic step.

"Police sources also said that Karan was tense as he had no job. He played for Souvenir Cricket Club and United Friends Sports Club and recently completed a Level 1 coaching course.