Shanto took his maiden Test century to 163 while Mominul weighed in with 127 as they shared Bangladesh's best ever partnership for the third wicket in Tests. 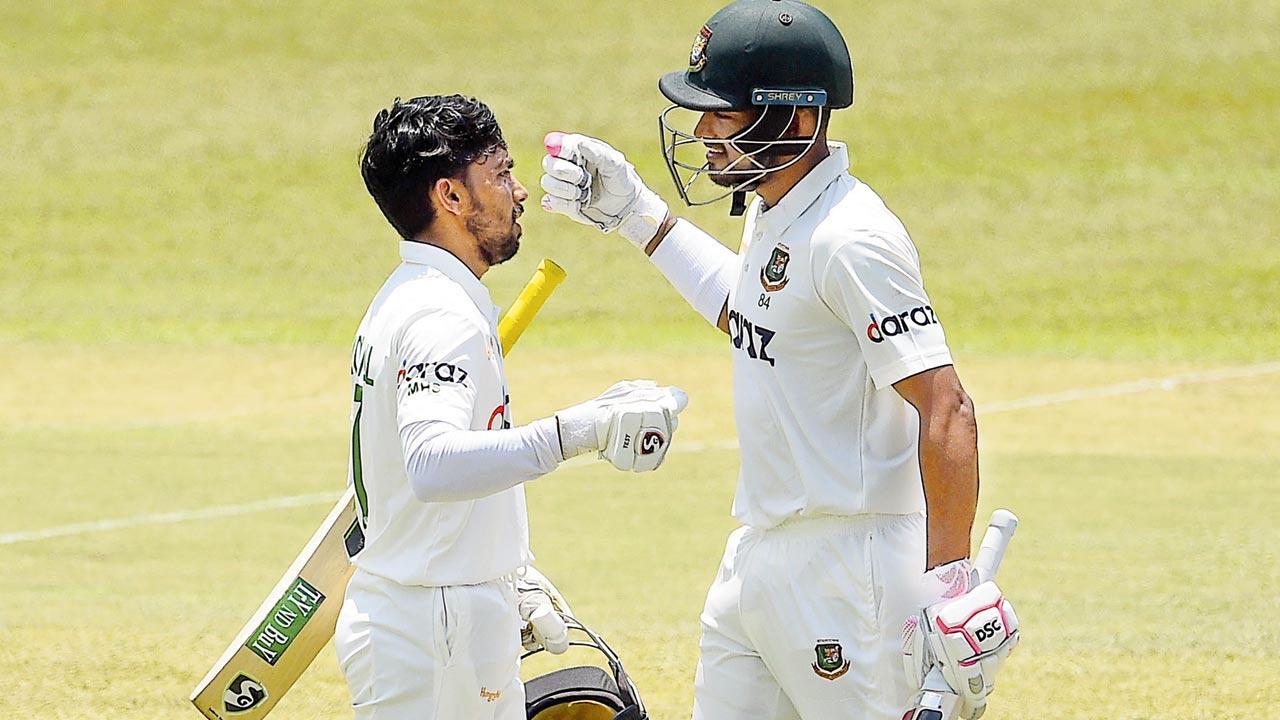 
Najmul Shanto and skipper Mominul Haque put on a record stand of 242 as Bangladesh reached an imposing 474-4 on day two of the opening Test against Sri Lanka on Thursday. Shanto took his maiden Test century to 163 while Mominul weighed in with 127 as they shared Bangladesh's best ever partnership for the third wicket in Tests. Both were dismissed but they were Sri Lanka's only successes as Mushfiqur Rahim, 43, and wicketkeeper-batsman Liton Das, 25, added 50 before bad light chewed up the last 90 minutes of the day's play to force an early close in Pallekele.

The tourists resumed the day on 302-2 with Shanto well set on 126 and Monimul on 64. Neither found the going easy on another stiflingly hot day, with the run rate grinding along against some tight Sri Lankan bowling. The left-handed Shanto, who was dropped on 28 on Wednesday, batted for close to nine hours, hitting 17 fours and one six. "Being a bit more patient, leaving a few more balls, cutting out certain scoring areas. He has played a fantastic innings," said Bangladesh coach Russell Domingo. "I am really pleased with him. He has worked really hard on his game in the last couple of months." After a wicketless first session, Shanto finally fell to Lahiru Kumara after lunch, giving away a return catch to the pace bowler. It marked the end of a marathon stand which also equalled the best third-wicket effort at the venue set by the Pakistan pair of Shan Masood and Younis Khan in 2015. Mominul reached his 11th Test hundred -- remarkably it was his first outside Bangladesh -- by cutting a wide delivery from Dhananjaya de Silva for four. De Silva finally removed the captain who edged to Lahiru Thirimanne at first slip.

"I think Mominul understands his game really well. He is a very calm person," said Domingo. "He is meticulous in his preparation. I think he is a fantastic Test batsman." Mushfiqur and Liton then stood firm to put an unbeaten stand of 50 and played some cheeky shots to frustrate the Sri Lankan bowlers. Mushfiqur hit a scoop shot over the wicketkeeper's head off Dimuth Karunaratne's medium-pace bowling. The final session was interrupted briefly for rain and then called off again due to bad light after just 7.5 overs. With 25 overs lost in the day, play will resume 15 minutes early on day three. Left-arm quick Vishwa Fernando said it was tough grind for the bowlers on the batting wicket. "We didn't get as much support from the wicket as we thought," said Fernando. "We felt it was dry underneath and it's now a batting wicket."

Next Story : T Natarajan ruled out of IPL due to injury: Reports