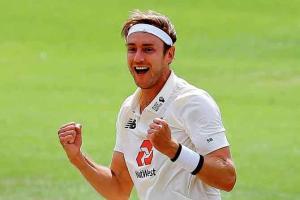 
Stuart Broad wants to follow "idol" James Anderson by being a force for years to come after taking his 500th Test wicket during England's series-clinching win over the West Indies. The 34-year-old Broad was controversially left out of the series opener -- the first time he had been omitted from a home Test in eight years -- which the West Indies won by four wickets at Southampton. During that match, Broad revealed how "angry" he felt at being on the sidelines but the Nottinghamshire seamer was included for the final two Tests of the series, both at Old Trafford. His 16 wickets, at under 11 apiece, were the most by a bowler on either side and pivotal to England's eventual 2-1 win against the West Indies as international cricket returned from the coronavirus lockdown.

He rounded things off in style by taking his 500th wicket during England's 269-run win in the third Test completed Tuesday, a match that also saw Broad return his first 10-wicket haul at this level since 2013. "A couple of weeks ago I was in a bit of a thinking place -- I couldn't leave a cricket ground where I'd been left out of the team. I thought 'where am I going here?'" said Broad. "But I'm glad I stayed strong because I'm very happy two weeks later. "You always hear ex-sportsmen saying they knew when it was time to go, that they'd lost that feeling. Well, I've still got it in abundance."

Broad, who has now joined long-time England new-ball colleague Anderson as one of just seven bowlers, and four pacemen, to have taken 500 Test wickets, added: "Jimmy is my idol on that. "He turns 38 soon and he's someone who I have watched very closely, a great friend of mine for many years. "Over the last few years, he has maintained himself and kept upskilling himself to be able to not only compete but get better at this level.

"If you look at both of our records over the last few years, we are actually improving. Compare my last 18 months to my career record and it's way better, which is always a great sign." Anderson, on 589 Test wickets, suggested before play on Tuesday that Broad, who now has 501 scalps, could surpass his tally, which is already an England record. "I've never even thought about that," said Broad. "I'm not particularly a goal-setter, so it's not as though I sit here and say, 'I want 600 wickets'." But, having insisted he felt fitter than ever at 34, he added: "If I keep bowling the way I am for the next few years then I wouldn't rule anything out."

Next Story : Why this hullabaloo about women's cricket?