He's a great example for everyone to love Test cricket so much, and has so much determination and passion to play for the country. He's been a great ambassador for the game, Virat Kohli said in the post-match press conference 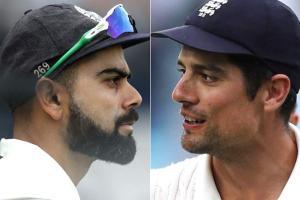 
A great ambassador for the game who has never gone out of line -- this was India captain Virat Kohli's tribute to England batting legend Alastair Cook, who retired from international cricket here. Cook scored a century in his last Test to end his international career on a high as England completed a 4-1 win over India in the five-match series Tuesday.

"He's a great example for everyone to love Test cricket so much, and has so much determination and passion to play for the country. He's been a great ambassador for the game," Kohli said in the post-match press conference. "I certainly have a lot of respect for him because he's one guy who has not gone out of line ever. Doesn't say a word to anyone in a negative manner, just carries on with his work and he's very sure about his work as well. I wish him well."

Kohli said Cook's determination reflects in his batting as he scored 147 -- his 33rd century -- in his last Test. "I asked him on the field are you having second thoughts that now you got 140 and he said 'Not at all'. He felt relieved more than anything else. You could see he was enjoying his batting all over again," he said. "I wish him well for whatever he decides to do now and congratulate him on a amazing career as an opener playing in these conditions.

"We understand how difficult batting can be, even if you play regularly (here), it still can be tough. But the fact that he scored so many runs all over the world shows the determination he's always had to be able to play 160 Test matches and have the longest run of not missing a Test." Following the 1-4 loss, India's next overseas assignment is the tour of Australia in December and Kohli talked about his team's chances.

"The progress has been there, definitely. We need to recognise when the situation is in our favour and how to solidify that situation even further. We have to make sure that the opposition cannot get back in to the game," he said. "More often than not, we have given the advantage to the opposition rather than them brilliantly turning around a situation," he said.

England's late-order came to their rescue often during the series and Kohli said his team needs to apply sustained pressure and not allow opponents to wriggle out of tough situations. "I know Sam (Curran) has been outstanding in this series but apart from that particular batting slot, it has not been up to brilliant batting always. It has been up to us not being able to apply that pressure for long enough as well," he said.

"We need to start series well. We can't warm-up in to a series because the first Test is always crucial, and we need to make sure we are in the right frame of mind to be able to do all the things right to strike first," Kohli said.

Next Story : ICC Rankings: India still No. 1 in Tests despite loss