With prolific run-scorer Shikhar Dhawan ruled out of the next two matches due to a thumb injury, Team India may find it tough to cope with the lack of an attacking left-handed batsman in their ranks 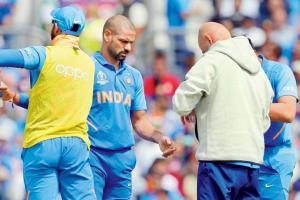 Shikhar Dhawan receives treatment after being hit on his left thumb by a rising delivery v Australia on Sunday; (right) Dhawan struggles against an Aussie bouncer. pics/ AFP

While facing Australian pacer Nathan Coulter-Nile, the southpaw sustained an injury on the back of his left hand in the region between the index figure and thumb during his century at The Oval on Sunday. It is quite clear that Dhawan will not be available for Thursday’s match against New Zealand here at Trent Bridge and for the Pakistan clash at Manchester on June 16. 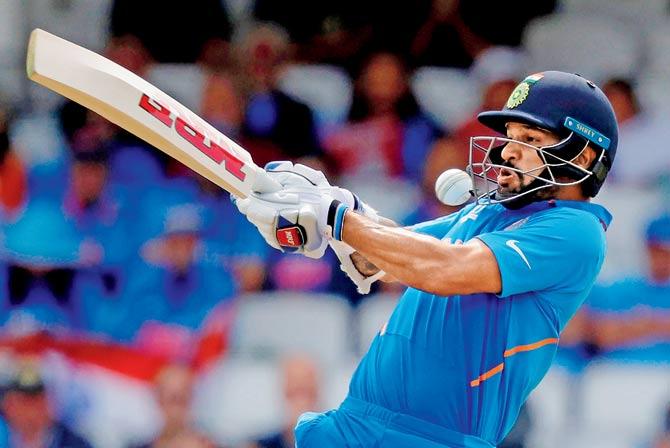 No replacement for now

A decision on the replacement will only be taken if the BCCI’s medical team rules out Dhawan from the tournament. His progress will be closely monitored in the coming weeks before arriving at any decision. A replacement can only be sought from the ICC technical committee if a player is ruled out.

With Dhawan being ruled out, at least, for the next two matches, India are left without an attacking left-handed batsman and India will feel the void left by the southpaw. Ahead of the World Cup, legendary Sachin Tendulkar had told mid-day that India need not worry over a lack of left-handers: “If there is a left-hander in the middle order then that gets the opposition thinking and they have to readjust their field settings. The bowlers have to constantly readjust their lines and lengths. So, it is an important part, but it is not the end of the world.”

Meanwhile, India must cope with the absence of one of their prolific run-getters. Dhawan amassed 1238 runs in the last 20 ICC matches (World Cup and Champions Trophy).

Next Story : Gavaskar wants Pant in if Dhawan ruled out; Gambhir calls for Rayudu