Key players to watch in India-Afghanistan clash on Saturday

India take on Afghanistan in the ongoing ICC Cricket World Cup 2019 on Saturday, Here we have a look at the players to watch out for n the upcoming clash 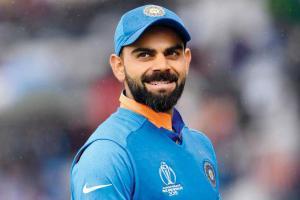 
The Men in Blue are rolling in the World Cup 2019 like a well-oiled machine and are still unbeaten in the tournament so far. Team India face Afghanistan on the back of a dominant display against rivals Pakistan and will be looking for another shining performance versus the Afghans to take them one step closer to the semi-finals.

India has not suffered even a single defeat in the premier tournament so far and will aim to continue their sublime form against Afghanistan. Whereas, Afghanistan have been on an abysmal run in the tournament as they have utterly failed to register even a single win so far in the competition.

Therefore, Afghanistan will have to make strenuous efforts to overpower India.

Both the teams possess players who have the ability to get their team over the line single-handedly. It will, therefore, be interesting to watch whether the match undergoes as anticipated or Afghanistan will manage to stun everyone with a win over unbeaten India.

Here is a list of key players in the match between India and Afghanistan:

India skipper Virat Kohli, who tops the ICC Men's ODI batting ranking, led India to three victories from four matches as their clash against New Zealand got abandoned to due rain. Kohli has amassed 177 runs so far in the tournament which includes two half-centuries. However, the 30-year-old is yet to score his century in the tournament. It will be exciting to see whether Kohli will be able to rack up 100 plus score against Afghanistan.

Apart from having number ODI batsman, India also have the number one ODI bowler, Jasprit Bumrah, who has been on an astounding from. Bumrah has the ability to hinder opposition's batting attack and he invigorates India's bowling attack. The 25-year-old has been a crucial bowler for India during death overs. Bumrah played a pivotal role during India's victory in their opening match against South Africa as he conceded just 35 runs from his 10 overs and took two wickets.

Although Rashid Khan bowled a forgettable spell against England, he has the skills to thwart any team's batting line-up. During the match against England, he conceded 110 runs in nine overs but he is the same bowler who gave away just 17 runs from 7.5 overs he bowled against Sri Lanka and even took two wickets. Khan also shined in the Indian Premier League 2019, where he took 17 wickets for Sunrisers Hyderabad.

Hashmatullah Shahidi has displayed a scintillating performance in this edition of the premier tournament as he is the only batsmen from Afghanistan side who has managed to score two half-centuries. Although Afghanistan faced an embarrassing 150-run defeat at the hands of England, Shahidi played a brilliant knock of 76 runs. If Shahidi delivered a similar inning against India, he can put pressure on India's bowlers.

There are other players like Mohammad Nabi and Indian pacer Mohammed Shami, who is set to replace the injured Bhuvneshwar Kumar in the tie. These two players are also to watch out for in the India vs Afghanistan match.

Next Story : Yoga helped me in being present in the moment: says Suresh Raina