Maradonas coffin was placed at the Presidential Palace here yesterday for a period of lying in state. He will be laid to rest at the Jardin de Paz cemetery, where his parents were also buried, on the outskirts of Buenos Aires 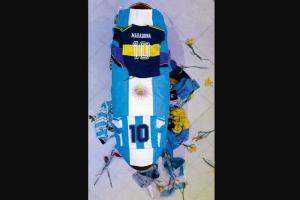 
Stunned Argentines were plunged into grief on Wednesday by the death of the country's favourite son Diego Maradona, a sublimely gifted sporting hero they saw as "the most human of Gods."

Maradona, 60, passed away after suffering a cardiac arrest at his home here on Wednesday. The news fell like a hammer blow to a nation beaten down by months of economic crisis and the Coronavirus pandemic, but one where football is a panacea for all ills. At 10pm the city exploded in cheers, horns, sirens and lights for the man, who famously wore No. 10, after a viral social media message called for "one last applause."

At the Diego Maradona Stadium, home to the Argentinos Juniors club, where Maradona made his professional debut, a large crowd set off and yelled "Maradooo, Maradooo."
Fans even gravitated towards the Obelisk landmark in downtown Buenos Aires— and, of course, the Bombonera which is home to Boca Juniors, where Maradona's genius was forged. Founders of the Maradonian Church, an internet-based group that uses religious language to venerate the player, saw over 1,000 people answer the "Church" call to gather in his honour at the Obelisk at 6pm, a traditional rallying point in central Buenos Aires for football celebrations.

Maradona's coffin was placed at the Presidential Palace here yesterday for a period of lying in state. He will be laid to rest at the Jardin de Paz cemetery, where his parents were also buried, on the outskirts of Buenos Aires.