Also, this is Maurizio Sarris first Scudetto of his coaching career and he became the oldest coach to win the title aged 61 years and six months 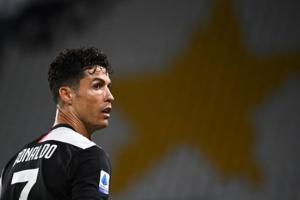 Juventus' Portuguese forward Cristiano Ronaldo looks on during the Italian Serie A football match between Juventus and Sampdoria played behind closed doors at the Allianz Stadium in Turin. Pic/AFP


Juventus forward Cristiano Ronaldo has dedicated their Serie A title victory to the victims who have suffered the most during this unprecedented times put forward by the coronavirus pandemic.

Juventus, on Sunday, continued their domestic dominance as they won their ninth successive Serie A title. They got over the line this season by beating Sampdoria 2-0 at home.

Ronaldo, who scored the opening goal in this encounter, took to social media to express his happiness after winning back-to-back league titles in Italy. He also sent across a heartfelt message to people who have been hit hard by the ongoing pandemic.

"Done! Champions of Italy. Delighted for the second consecutive championship and to continue building the history of this great and splendid club," Ronaldo wrote in a post on his Instagram handle.

"This title is dedicated to all Juve fans, in particular to those who have suffered and are suffering from the pandemic that has taken us all by surprise by overturning the world.

Also, this is Maurizio Sarri's first Scudetto of his coaching career and he became the oldest coach to win the title aged 61 years and six months.