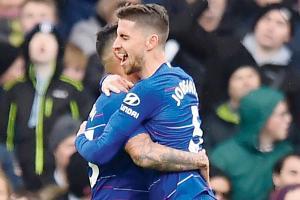 
Jorginho fired Chelsea to a 2-1 win at struggling Fulham yesterday as Blues keeper Kepa Arrizabalaga began to make amends for his Wembley mutiny with an impressive display.

Maurizio Sarri's side took the lead through Gonzalo Higuain before Calum Chambers equalised at Craven Cottage. Jorginho restored Chelsea's lead with his first goal since the opening weekend of the season.

Chelsea were also indebted to Kepa for a series of superb saves that preserved their lead after the break, lifting the sixth placed Blues within two points of fourth placed Manchester United (58 points). Despite an improved display, second bottom Fulham have lost eight of their past nine league games and sit 10 points from safety.