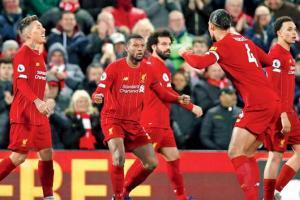 
Liverpool players showed their solidarity with the Black Lives Matter movement following the death of George Floyd in the United States by taking a knee around the centre circle at Anfield on Monday. Reds stars including Virgil van Dijk and Trent Alexander-Arnold tweeted the same photograph with the words "Unity is strength", accompanied by the hashtag #BlackLivesMatter. Made famous by former NFL quarterback Colin Kaepernick's kneeling during pre-game renditions of the US national anthem, bending down on one knee has become a symbol in the fight against racial injustice.

Manchester United striker Marcus Rashford said he feared society was "more divided than ever" in the violent aftermath of Floyd's death in Minneapolis. Floyd died last Monday after a white police officer held his knee on the handcuffed black man's neck for several minutes. The shocking incident has sparked protests and riots in cities across the world and has been met with a strong reaction from sporting icons such as Michael Jordan and Lewis Hamilton. "At a time I've been asking people to come together, work together and be united, we appear to me more divided than ever," said Rashford.

England international Jadon Sancho was one of several Bundesliga footballers to make a stand over the weekend, while scoring his first career hat-trick for Borussia Dortmund on Sunday. Sancho displayed a T-shirt with "Justice for George Floyd" written on it after scoring the first of his three goals in a 6-1 win over Paderborn. "we shouldn't fear speaking out for what's right," said Sancho.

The English Professional Footballers Association (PFA) said in a statement: "We want America to know that the world is watching. The action taken to ensure justice for George Floyd at this moment sends a clear message about the perceived value of black lives in America." Former England captain David Beckham, who owns Major League Soccer side Inter Miami, posted on Instagram: "I stand in solidarity with the black community and millions of others across the world who are outraged by these events."

Next Story : FIFA: We understand the sentiments of players