The floppy-haired Uruguayan and Mbappe were subbed at the break as coach Thomas Tuchel changed all his outfield players. PSG play Rennes in the domestic Trophee des Champions on Saturday in Shenzhen 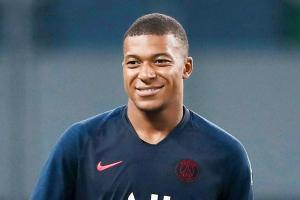 
Suzhou (China): Kylian Mbappe was the star of the show once more for Paris Saint-Germain, scoring an eye-catching first goal as the French champions beat Sydney FC 3-0 on Tuesday in China. Strike partner Edinson Cavani also scored in the first half before substitute Metehan Guclu netted with a clever flick a minute from time in sweltering Suzhou.

In the absence of Neymar, the Brazilian who is still working his way back to full fitness, the French starlet Mbappe was the focus of attention. There was a buzz of anticipation each time the 20-year-old prodigy received the ball. Julian Draxler, the German midfielder, told AFP on Monday that the attacking trio of Mbappe, Cavani and Neymar -- who wants to leave the club -- had "egos".

Two of those egos collided when Mbappe and Cavani got in one another's way, squandering their side's first chance. An inquest ensued. Playing in fluorescent orange, the Parisians, who earlier in the day announced the signing of Everton midfielder Idrissa Gueye, lay siege to the Sydney goal. Moments after the Australians had a goal ruled out for off-side, World Cup winner Mbappe exchanged passes with Juan Bernat before firing beyond goalkeeper Andrew Redmayne on 37 minutes.

Six minutes later it was 2-0, Cavani hooking the ball in after Redmayne parried. The floppy-haired Uruguayan and Mbappe were subbed at the break as coach Thomas Tuchel changed all his outfield players. PSG play Rennes in the domestic Trophee des Champions on Saturday in Shenzhen.

Next Story : Ex-footballer Jermaine, wife Alice get a reality check