The Powai schoolgirls pressed harder and managed to double their lead two minutes from the half-time whistle. This time Mihika did the spadework to create the opening for Disha to score 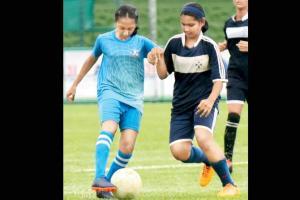 
Captain Disha Khadtare and striker partner Mihika Saraph combined effectively in assisting each other as they both scored a goal to fashion Bombay Scottish's (Powai) 2-1 win against St Lawrence (Borivli) in a girls U-16 Division-II quarter-final of the MSSA inter-school football tournament at the Neville D'Souza ground, Bandra yesterday.

In the third minute, Disha created an opening for Mihika who made no mistake in slotting past St Lawrence goalkeeper Prachi Raddi to give Scottish the early advantage. The Powai schoolgirls pressed harder and managed to double their lead two minutes from the half-time whistle. This time Mihika did the spadework to create the opening for Disha to score. 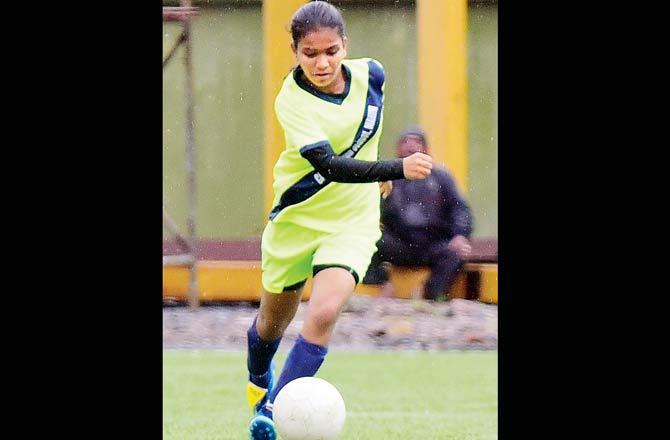 Jennifer Kounder of Canossa Convent was too good yesterday

On resumption, St Lawrence girls returned a transformed side and did more of the attacking, but for all their hard work they could only manage one goal, which came through the effort of Yashika Rawat in the 35th minute.

Yashika picked up the ball on the edge of the box and then dribbled her way past a couple of defenders before sending a low angular shot past the Scottish goalkeeper.
In the semi-finals, Scottish meet Canossa Convent (Mahim) who defeated DY Patil (Worli) 3-0.

Bhumika Mane scored two goals and Jennifer Kounder got one to complete the winning tally. Meanwhile, Aneri Raval continued to dazzle as she notched up another hat-trick to power Nahar International (Chandivali) to a 6-0 victory against Lilavati Podar International (Santacruz), who fielded just nine players in their quarter-final match at Cooperage ground. After Keisha Virani scored the first two goals for Nahar International, Aneri got in the thick of action scoring four goals in succession to seal the big win.

In the fourth quarter-final, St Thomas (Goregaon) got the better of Rustomjee International (Dahisar) by a 1-0 margin with Dhiti Varma scoring the lone goal.

Next Story : Bayern Munich defender Boateng under probe for assault